Diplomatic immunity is a legal loophole that, like "sovereign immunity" has been used, literally, to get away with murder.[1]

Diplomatic immunity has a history which goes back millennia. It was agreed as international law in the 1961 Vienna Convention on Diplomatic Relations, which renders diplomats immune from prosecution when on official duties. Host countries may expel diplomats and home countries are expected to prosecute diplomats in their home countries, though this is often overlooked for minor crimes.[2]

Diplomatic immunity is routinely used to avoid offences such as parking restrictions.

Sibel Edmonds has testified that in her experience as a translator she witnessed senior people from the US State Department successfully stopping drug busts at the last minute by phoning and claiming that those involved had "diplomatic immunity" and tat the investigation must therefore be stopped immediately.[3] 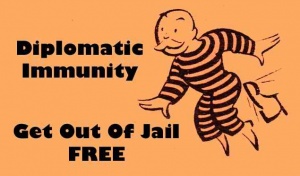