Sibel Deniz Edmonds is a Turkish-American[1] former FBI translator turned whistleblower. The most gagged woman in US legal history, she founded the National Security Whistleblowers Coalition[2]. She posted images without comment onto a page entitled "State Secrets Privilege Gallery" - which has assisted others in tracking malfeasance. Principal among her revelations are the development of Operation Gladio into Operation Gladio/B, a NATO-backed project to carry out false flag attacks in the name of "Islamic terrorists".

In April 2013, Edmonds revealed that Osama bin Laden and his number 2 Al Qaeda lieutenant Ayman al-Zawahiri worked with the US government for 3 months after 9/11 to coordinate destabilisation in the Caucus region.[3]

Sibel Edmonds is fluent in English, Turkish, Farsi and Azerbaijani. She has a MA in Public Policy and International Commerce from George Mason University and a BA in Criminal Justice and Psychology from George Washington University.[2]

She was hired just after 9-11 as a language specialist for the FBI’s Washington Field Office where she reports that her broad language abilities, combined with a lack of other similarly capable staff in the FBI lead her to overcome the deliberate compartmentalisation which prevented field operatives from gaining a bigger picture of the events in which they were directly involved.

During her work with the FBI, she discovered serious security breaches, cover-ups and deliberate blocking of intelligence. After she reported these acts to FBI management, she was disciplined and ultimately fired in March 2002. Her later claims have gained her awards and fame as a whistleblower.[4] The American Civil Liberties Union has termed her "the most gagged person in the history of the United States".

On 8 August 2009, Edmonds gave a sworn deposition in which she testified to her knowledge of treasonous and corruption involving current and former members of Congress, US State Department and Defense Department officials. Given the nature of the deposition, the lines of questioning focused on Turkish espionage and services obtained through bribery and blackmail by Turkish officials and proxies. However, Edmonds has previously disclosed that the corruption involving U.S. officials also includes money laundering, drug trafficking, arms dealing, selling nuclear secrets, U.S. support for Ossama Bin Laden and Al Qaeda and obstruction of FBI investigations related to 9-11 both before and after the attacks. Edmonds learned of these things from wiretaps she translated for the FBI in 2001-2002.[5]

Edmonds testifies how compartmentalisation prevented agents on the ground from forming a bigger picture of the intrigues they were involved in:

"The most important thing for people to get is we're not even looking at one big investigation, all these agents working together. They were chopped up and divided, but because I worked in the central place... other agents were sending their material to me... I was in this position to see all the dots being connected... These agents, while I was there, because I was the central person, they started connecting the dots."
Sibel Edmonds[6]

US Attorney General John Ashcroft asserted "State Secrets Privilege" to block legal action based on Edmonds' deposition. The Department of Justice moved to prevent US Congress from any discussion of her case by its "retroactive re-classification".

Sibel Edmonds has been an energetic independent journalist, attempting to raise awareness about the deep state and the corruption she saw evidence of while working for the FBI. In August 2004, she set up the National Security Whistleblowers Coalition.

The FBI classified 100% of Sibel's Classified Woman. When she found out that she doesn’t need to get pre-publication approval for “novels”, she decided to write a novel, The Lone Gladio, a roman à clef. 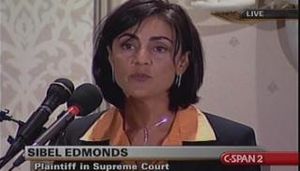