★ Start a Discussion about this document
SKRIPAL TWITTER ROUNDUP 24.03.18

Momentum gathering for action against Russia

Andreas Umland @UmlandAndreas 2014: @AmbJohnBolton: Since we are now acting in the midst of deterrence failure, we face a complex problem of dealing with the ongoing Russian aggression while simultaneously reestablishing an enduring @NATO position of strength. https://tws.io/2DRiL0t @weeklystandard https://tws.io/2uc0600 https://twitter.com/UmlandAndreas/status/977440320211349504

Jakub Janda @_JakubJanda To me, this is the most important thing of the Russian WMD attack episode: France is planning to expel Russian intelligence officers.… https://twitter.com/Fabana84/status/977443271084511232

Integrity Initiative @InitIntegrity Mr Putin is playing by new rules; he’s ready for a fight — but are we? https://www.telegraph.co.uk/news/2018/03/22/mr-putin-playing-new-rules-ready-fight/?WT.mc_id=tmg_share_tw … via @telegraphnews https://twitter.com/InitIntegrity/status/977462935747481600

Ben Nimmo @benimmo Thread: Case study in Russian and pro-Kremlin Twitter activity around the Skripal poisoning case, and how it tries to influence the UK debate. http://bit.ly/2DULQbC https://twitter.com/benimmo/status/977489641900163072

Niels Ockelmann � @NOckelmann Very predictably, Russia is sowing doubt about the impartiality of OPCW. It's almost as if they know what the result will be. Pravda Report @engpravda Will Russia be able to survive the psychic attack from the EU and NATO? http://www.pravdareport.com/world/europe/23-03-2018/140476-russia_attack-0/ … http://bit.ly/2pFoa5A https://twitter.com/NOckelmann/status/977455909612945408

Dan Kaszeta @DanKaszeta OK. This deserves some attention as it keeps coming up: First, I don't know how you can deduce lethality statistics based on a case study of 3 people without knowing route of exposure or absorbed dose. Thomas Embleton @thomas_embleton @DanKaszeta apparently Novichock isn’t that lethal! Oh so you know @nick_732 they are only alive due to prompt medical attention and advice from specialists in chemical warfare https://twitter.com/DanKaszeta/status/977503918036004864

James Marson @marson_jr The latest on U.K.-Russia relations: "The English killed Ivan the Terrible ... in order to turn Russia into their protectorate. For more than four centuries, perfidious Albion has been waging an undeclared war against Moscow." http://bit.ly/2G3QERF https://twitter.com/marson_jr/status/977442623899209728

Craig Silverman @CraigSilverman A few weeks ago @d1gi and I showed that Russian trolls ran wild on Tumblr and the company had refused to comment on it: https://www.buzzfeed.com/craigsilverman/russian-trolls-ran-wild-on-tumblr-and-the-company-refuses … Now it acknowledges it found 84 IRA accounts last fall and gave info about them to the Dept of Justice: https://twitter.com/CraigSilverman/status/977198962414202880

John Sweeney @johnsweeneyroar A letter from the state with a strong history of political murder. 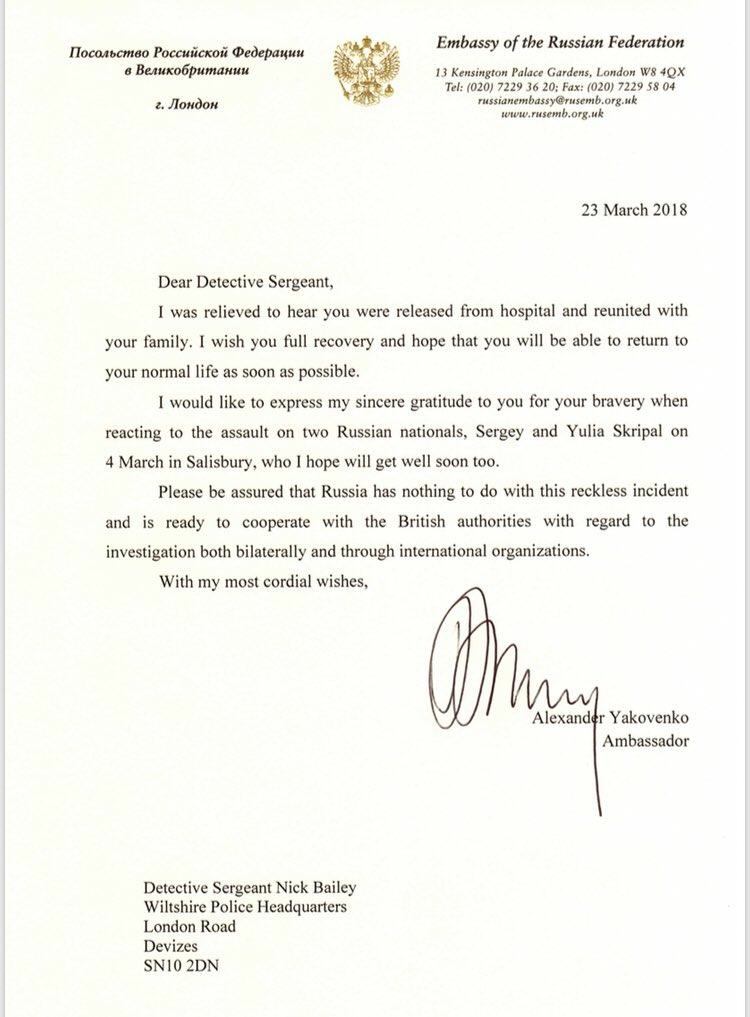 Chris Hernon @ChrisHernon "The lying Russian leader aims to convince the gullible and paranoid that there is no such thing as truth" http://bit.ly/2pDrsql https://twitter.com/ChrisHernon/status/977509015449210886

The nature of Putin’s regime

Daniel Twining @DCTwining Kremlin has labeled @gmfus “undesirable” - a distinction @IRIglobal earned in 2016. Our response then: “This move says more about Vladimir Putin than about IRI. It’s further proof that he fears allowing his people an opportunity to shape their own future.”

Ryan O'Farrell @ryanmofarrell It is difficult to imagine a more blatant or terrible war crime then using bunker busters and heavier-than-air chemical weapons to kill civilians hiding in bomb shelters. Remember this when they tell you that Assad is a lesser evil. Elizabeth TsurkovVerified account @Elizrael Both the chemical weapons use by the regime & bunker-busters are designed to kill those hiding in underground shelters. The regime repeatedly launched chlorine gas attacks that lead civilians to escape underground shelters because the heavy gas seeps into the shelters. https://twitter.com/ryanmofarrell/status/976177412030464000