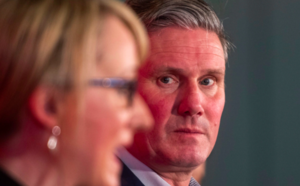 From her earliest days as Shadow Education Secretary, Keir Starmer set about undermining Rebecca Long-Bailey – because her socialist politics and loyalty to trade unions were incompatible with his leadership.

Keir Starmer never intended for Rebecca Long-Bailey to play a prominent role in his shadow cabinet. Her 135,000 votes in the leadership election meant she couldn’t be excluded from high office entirely – not, at least, after a campaign in which he had promised to stick by Corbyn’s policies and preached a message of unity. But nor was she going to be allowed to continue her work on Labour’s Green New Deal. The Great Offices of State were clearly out of the question.

And so they settled on Shadow Education Secretary, where Long-Bailey’s close friend Angela Rayner could give her a steer. The brief was calculated to be significant enough to appease the Left, but far enough from the leadership’s priorities to keep the shadow cabinet’s highest ranking socialist relatively quiet. After all, the word ‘education’ hadn’t even appeared in Starmer’s famous ten pledges during the election.

But even the most forensic political operation couldn’t have foreseen the emergence of a global pandemic. The COVID-19 crisis forced Starmer and his team to adapt – and had the unhappy consequence of elevating the importance of the education brief. Starmer resisted this initially, making the decision to leave Long-Bailey out of his Covid-19 response committee. Soon, however, conditions imposed themselves.

On April 15th, Starmer made his first major Covid-19 intervention, telling the BBC’s Today Programme that the government should prioritise the reopening of schools. This had come just one day after the joint general secretaries of the National Education Union (NEU) had written to the prime minister encouraging him to stop “disturbing” and “unhelpful” speculation in the national media about schools reopening.

Starmer’s intervention immediately put him at odds with his Shadow Education Secretary. Long-Bailey’s first act after her appointment to the position had been to tweet an official NEU advice website, telling her followers she was “sharing it with all the parents I know.”[1] This was no surprise – she spent much of her first month pushing trade union communications from the TUC, Unite, the CWU and others in response to the Covid-19 crisis. Unsurprisingly, these were far less common features of Starmer’s own communiqués.

By the end of April, Long-Bailey was making her strongest statement yet backing teachers’ unions and their concerns about the government’s plans to reopen schools without proper health and safety precautions in place. “Schools must only open,” she said, “when it is unequivocally safe to do so for pupils, staff and their families.”[2]

On May 3rd, Long-Bailey came out in support of the National Education Union’s five tests setting conditions to be met before schools could reopen.[3] The union gained significant support throughout the month for these positions, including from many Labour MPs up to and including deputy leader Angela Rayner. But Starmer consistently refuse to endorse them, or to use them in his questions to the prime minister on the subject of school reopenings. The gulf between their approaches was evident.

That month the sidelining of Long-Bailey began in earnest. As the fate of schools became the major national controversy, she was almost absent from television and radio. In her place, other shadow cabinet figures made appearances – and often directly contradicted her line. The most prominent of these came on May 17th, when shadow minister for business Lucy Powell went on Sky News to say that she would “feel confident” sending her children back to school.[4]

During her interview, Powell went so far as to say that the health advice suggested there were relatively few risks to children returning – saying WHO advice indicated that their infection rates were lower. This came just two days after the British Medical Association, representing doctors across the country, had weighed into the debate backing the NEU’s opposition to school reopenings.[5] Unions were dealing the government’s reckless plans to reopen schools blow after blow while Starmer’s team were helping to prop them up.

On May 20th, the New Statesman, which has acted as a mouthpiece for the Starmer leadership since his election, clarified what was already obvious to observers. The Labour leader had made the decision not to “wade in” to the debate over schools reopening. As teachers fought back against daily attacks on the front pages of the right-wing press, they could expect little if any support from Keir Starmer.

Long-Bailey, by contrast, hit back at the hate campaign. She called out the Daily Mail directly[6] for its coverage and denounced “teacher bashing.”[7] She backed the NEU and its position day after day after day. She encouraged Labour members to sign a petition supporting the five tests.[8] In the days before the government’s plans came into effect, she was still holding them to account by the NEU’s standard – as most of the rest of the shadow cabinet was hedging its bets.[9]

In the end, teachers and their unions won out. A week after it began the phased reopening of schools, the government was forced to abandon its plans.[10] Starmer’s allies in the liberal media dutifully reported it as a victory for his leadership. As usual, however, this ‘leadership’ involved swooping in after public opinion had changed in order to claim credit.

“There go my people,” as a French radical once said, “I must find out where they are going so that I may lead them.”

Long-Bailey’s approach to schools reopening had been entirely vindicated. Rather than waiting for polls to move, or focus groups to tell her what she wanted to hear, she backed teachers and their unions as they changed the political terrain and forced the government into a concession. This was politics in the best traditions of the labour movement – understanding that change can be made by collective action and that politics does not begin and end in the halls of Westminster or the comment pages of the Observer.

But far from his rhetorical commitment to a ‘radical’ agenda, this approach was anathema to Keir Starmer. And, soon enough, Long-Bailey was to find herself consigned even further to the margins. On June 17th, Labour MP Jess Phillips appeared on Peston to say she wanted “children to go back to school now.”[11] The next day, her interview was clipped to feature on official Labour Party accounts.[12] That night, a press release from Long-Bailey on the government’s schools policy was dumped onto Twitter at five minutes past midnight.[13]

The following Sunday, a key member of Starmer’s top team, Rachel Reeves, appeared on Ridge to give an interview over education policy.[14] She made headlines in the media for her soundbite that the government had been “asleep at the wheel” on school reopenings – but, in truth, the same could have been said for her own party leader.

To many onlookers, Rebecca Long-Bailey’s sacking might have seemed strange. After all, she was fired for sharing an interview by someone else in which they made a claim which was only marginally incorrect. (The Israeli police do, in fact, train the US police and encourage the use of “excessive force” against those who “pose little or no threat.”[15])

Long-Bailey did not flag those comments – instead simply praising long-time Labour supporter Maxine Peake – and agreed the wording of a clarification with Starmer’s office.[16] The accusation that she defended an “antisemitic conspiracy theory” is entirely without basis. In fact, it is probably actionable.

But none of that really mattered. Long-Bailey’s sacking was not about the proximate cause but the political context. Starmer had hoped, no doubt, to marginalise her over many months and discard her in a reshuffle. The prominence of education during the Covid-19 crisis made that impossible. Instead, he accelerated the move against the Left he was always going to make – winning himself acclaim from the media in the process.

The socialist politics Rebecca Long-Bailey represents has no place within Starmerism, as the other Left members of the shadow cabinet will realise in due course. His political project is to present Labour to the British establishment as a safer pair of hands, a less disruptive force, than even the Tories.

Such an approach might win an election. Certainly the polling looks better than it did six months ago (if not yet reaching the heights of 2017 or 2018 under Corbyn). But even if it did, it holds no prospect of ‘transformative’ or ‘radical’ change. For these, you have to challenge the powerful – not comfort them.

Starmer’s determination to be seen as sensible by the business and media elites is also incompatible, in any longer-term sense, with unity with the Left. It is not possible to present yourself as unthreatening to capital with principled socialists as part of your coalition. And so, they were always going to be sidelined – it was a matter of time.

Starmer can win on his own terms only by delivering a generational defeat to the Left and driving socialism to the margins. Rebecca Long-Bailey’s sacking should have made that clear even to those who didn’t want to see it. One question remains: is the Labour Left prepared to respond to that reality?