Document:Why the Canadian Left is burning down churches 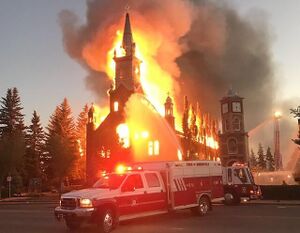 It’s strange that Canada, one of the most privileged countries in the world, is home to people who repeatedly insist that it is the worst. This month, in a classic move, activists commemorated Canada Day by trying to cancel it. The trigger was the discovery of hundreds of unmarked graves on sites that had been church-run residential schools for indigenous children, which are, to be fair, a horrifying stain on Canada’s history.

“We’re collectively mourning right now and in grief, and a lot of old wounds have been dug up and reopened because of this,” said David Pratt, of the Federation of Sovereign Indigenous Nations. In response, the capital city of British Columbia, Victoria, cancelled its celebrations, encouraging people to consider “what it means to be Canadian in light of recent events”.

A co-chair of the Canada Day committee in Fredericton said, “a quiet day of reflection may be the best way for our community to spend the holiday.” And cancelled their celebration. Sol Mamakwa, a Member of Provincial Parliament in Ontario, called on people to “reflect on the dark roots of Canada”. The Prime Minister, Justin Trudeau, whose father was PM during the time the residential schools operated, suggested the country think of “those for whom it’s not yet a day of celebration.”

Of course, celebration and consideration are not mutually exclusive. And despite the fact that the majority of Canadians wanted to celebrate on July 1, #CancelCanadaDay trending on Twitter was enough for these politicians.

But it seems the activists calling to cancel Canada were not interested in quiet reflection. A number of churches across the nation were vandalised and burned to the ground, in protest of the past. One wooden church named St. Ann’s near Hedley, British Columbia — where members of the Upper Similkameen Indian Band had been gathering for over a century — was reduced to ash. Not far away, The Sacred Heart — which has served the Penticon Indian Band since 1911 — was also razed.

Churches have been burned in Alberta, Saskatchewan and Nova Scotia. Almost all were on indigenous land, destroyed, apparently, in response to deaths of the children who were removed from their families sent to the schools in a policy of forced assimilation. But what do these acts really accomplish?

It is true that Canada’s residential schools existed to destroy indigenous cultures and languages and were notorious for neglect and abuse. By the Seventies, most of these schools were run by the state. Nevertheless, the latest scandal has been widely misunderstood.

The “unmarked graves” that precipitated the cancellation of Canada Day and the church burnings were not the graves of murder victims — a fact many activists appear to misunderstand. Analysis of the remains shows that the children mostly died from the same causes as non-indigenous children at the time — things like influenza and tuberculosis.

Nor were the graves kept secret. A landmark 2015 report from the Truth and Reconciliation Commission had an entire volume entitled “Canada’s Residential Schools: Missing Children and Unmarked Burials”. The report describes how “the practice throughout the system’s history was to keep burial costs low, and to oppose sending the bodies of students who died at schools back to their home communities,” hence why there were cemeteries on the school grounds. Very few articles about the report pointed out these facts (besides Brian Lilley’s in the Toronto Sun.)

Moreover, the graves were not intentionally unmarked; rather, the markers decayed over the years and were simply not maintained. The “discovery” of these unmarked graves was not a discovery, then, but something activists could have read up on years ago. It’s perfectly reasonable to be upset and disgusted by these facts. But it is important to get the facts right.

The Abbotsford News reported that a residential school survivor and Indigenous elder was “devastated” after St. Ann’s was razed. Her ancestors had helped build the church. Upper Similkameen Indian Band Chief Bonnie Jacobsen also expressed dismay and disbelief at the burnings, which she called, “complete disregard for our elders and ancestors,” adding, “Putting our lands, wildlife, and members at risk is not the way.” Keith Crow, the Lower Similkameen Indian Band Chief, said “I don’t see any positive coming from this and it’s going to be tough.”

These church burnings are part of a recent trend on the Left to destroy symbols or statues that some feel are representative of a regressive time. Statues of Queen Victoria and Queen Elizabeth II were also casualties of Canada Day this year. When progressives tweet their support of extreme actions — which tend not to have any effect on them personally, or even their communities — they ignore the fact that destruction and violence do not tend to effect positive change for the communities they claim to be defending.

Both the Sixties race riots and the LA riots in 1992 destroyed working class communities populated by people of colour, which which never truly recovered, despite decades of working to rebuild. Many families were forced to leave the neighbourhood, and countless businesses were permanently erased. More recently, the result of Antifa-led Black Lives Matter riots in Portland and Seattle has been to sow even further division and repulsion towards those who claim to seek justice but advocate for and perpetrate violence against anyone who fails to toe the line.

Who are these activists helping, when they burn down local businesses and religious buildings? These responses are too often about projecting toughness and holier-than-thou “commitment” to the cause. Often, they go too far. Last week, executive director of the BC Civil Liberties Association (BCCLA), Harsha Walia, resigned after responding to the church burnings by tweeting, “Burn it all down.”

Walia, a long-time Left-wing activist, has long projected extreme views — advocating for censoring and cancelling those she deems political opponents. Before becoming the director of a civil liberties organisation she was, for instance, a supporter of a petition to have me fired from my job as an editor at a Left-wing publication in 2015 on account of my criticisms of the sex trade and advocacy for the Nordic model of prostitution law; she worked to have a talk by journalist and author Chris Hedges cancelled that same year, for the same reason. As a proponent for the full legalisation of the sex trade, Walia felt entitled to silence those who viewed the trade as inherently exploitative and wanted the men responsible for that exploitation held to account.

Advocating for the destruction of Canadian churches is an entirely inappropriate thing for a person representing an organisation supposedly committed to protecting freedom of religion and assembly to do. But the rush of power and validation activists experience in making such extreme statements ensures many speak without consideration for facts or consequences. Walia is, alas, also a typical product of modern progressive activism, which has devalued truth, rationality, and practicality in favour of short-sighted hyperbole.

This is why activists rushed to spin the “unmarked graves” story into a shocking discovery, hidden by a media and liberal government that is always at their mercy. The result of this rhetoric was arson that devastated people whose lives most urban liberals can’t imagine. Activists put themselves centre-stage, to the detriment of communities; it’s disturbing, this knee-jerk response towards violence, destruction, and cancellation. Leftist leaders, in particular, must resist this urge, lest the entire Left burn all its bridges and go up in flames. Policy must be rooted in facts and rational thought. But perhaps that’s a little too dull for the burn-it-all-down crowd.