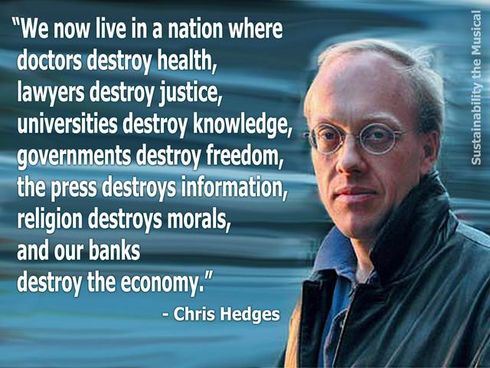 Christopher Lynn Hedges is a ex-war correspondent who having finally had enough of war, returned to the United States and found the class conflict increasingly breaking out. He is a compassionate, educated and eloquent advocate of non-violent civil disobedience. Notwithstanding his failure to address the use of false flag attacks in the 21st century, he is a widely respected speaker against the growth of the global fascist Police State, and made a legal challenge to the 2012 NDAA.

“The crisis that we face is not so much an economic crisis but a moral crisis. The utter cynicism on the part of very well paid media who have become in essence hedonists of power (which is what courtiers are) that the truth no longer matters, that that sacred contract that a great reporter makes between the viewer or the reader to tell them the truth is no longer relevant.”
Chris Hedges [1]

Hedges' father was a progressive Christian minister who fought for the rights of homosexuals. He graduated from Harvard Divinity School but became disillusioned with institutionalized religion as practiced in USA and became a war correspondent in 1983.

Hedges reported on wars and "terrorism" for almost 20 years until he snapped, and realized he was no longer going to write about particular wars within the strict confines of his editor's brief, but freelance, about the entire phenomenon of war. He has since written almost a book a year, including the best selling War Is a Force That Gives Us Meaning in 2002. His books tend to revolve around the ongoing social and economic struggles in US society and the need for consciousness of and resistance to the increasingly tyrannical plutocracy.[2]

Hedges v. Obama is a lawsuit filed January 13, 2012 against the Obama Administration and members of the U.S. Congress by a group including Christopher Hedges. They challenged the National Defense Authorization Act for Fiscal Year 2012 which legalizes the U.S. government's to indefinite detention of people who are part of or "substantially support" Al Qaeda, the Taliban or associated forces engaged in hostilities against the United States. On 28th April, 2014, the US Supreme Court let an earlier appeals court verdict stand, implying that there was nothing unconstitutional in indefinite detention without trial.[3]

In 2014, Chris Hedges was accused of plagiarism in what Op Ed News termed "huge hit piece" that made a big deal of his "sloppy sourcing".[4] As of December, 2016, the articles was #10 on Google when searching on "Chris Hedges".

As a catharsis, Chris Hedges published War Is A Force That Gives Us Meaning.

A Document by Chris Hedges