Ed Vulliamy is an award-winning British journalist and writer.[1]

In 2019, Ed Vulliamy was by played the actor Rhys Ifans in Gavin Hood's acclaimed Hollywood film "Official Secrets" about the case of Katharine Gun, a GCHQ agent who blew the whistle on illegal bugging of UN diplomats during the lead-up to the Iraq invasion of 2003, with Keira Knightley in the lead role. Vulliamy features in the film furious at censorship by his own paper of a story he filed during October–December 2002 from an inside CIA source, Mel Goodman, affirming that Iraq had no weapons of mass destruction, while intelligence was being 'cooked' by a special office in the Pentagon – and then locating the NSA secret agent, Frank Koza, who ordered the illegal bugging. Vulliamy has called Ifans' performance "my alter idem, more me than I am!".[2] 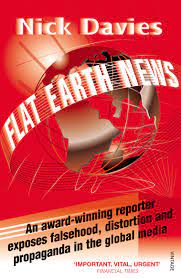 In his book "Flat Earth News", Vulliamy’s colleague at the Guardian Nick Davies tells the story of how Roger Alton, editor of the Observer at the time of the Iraq war, and a credentialed, licensed journalist if ever there was one, sat on one of the biggest stories in the paper’s history for months on end.

In late 2002, Vulliamy, a veteran and much trusted reporter, persuaded Mel Goodman, a former senior CIA official who still had security clearance at the agency, to go on record that the CIA knew there were no WMD in Iraq – the pretext for an imminent and illegal invasion of that country. As many suspected, the US and British governments had been telling lies to justify a coming war of aggression against Iraq, and Vulliamy had a key source to prove it.

But Alton spiked this earth-shattering story and then refused to publish another six versions written by an increasingly exasperated Vulliamy over the next few months, as war loomed. Alton was determined to keep the story out of the news. Back in 2002 it only took a handful of editors – all of whom had risen through the ranks for their discretion, nuance and careful “judgment” – to make sure some kinds of news never reached their readers.

Social media has changed such calculations. Vulliamy’s story could not be quashed so easily today. It would leak out, precisely through a high-profile independent journalist like Julian Assange or Craig Murray. Which is why such figures are so critically important to a healthy and informed society – and why they, and a few others like them, are gradually being disappeared. The cost of allowing independent journalists to operate freely, the establishment has understood, is far too high.[3]

This page imported content from Wikipedia on 1 August 2021.
Wikipedia is not affiliated with Wikispooks.   Original page source here
Retrieved from "https://wikispooks.com/w/index.php?title=Ed_Vulliamy&oldid=218062"
Categories: