Eyes Wide Shut is a 1999 film directed, produced and co-written by Stanley Kubrick. 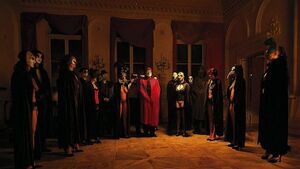 Kubrick’s attention to detail and symbolism gives the movie another dimension – one that cannot be seen by those who have their eyes wide shut. Not only does the movie depict the world’s richest and most powerful people partaking in occult rituals, it also shows how this circle has also the power to exploit slaves, to stalk people, and even to get away with sacrificial murders, which are then covered up by media.

Kubrick died six days after showing his final cut to Warner Bros. Pictures, making this the final film he directed. Considering the fact that Eyes Wide Shut is about an occult secret society that eliminates those who cross its path, some theories arose about Kubrick’s death and its suspicious nature.

Dr. Bill Harford and his wife, Alice Harford, live in New York City with their daughter Helena. They attend a Christmas party hosted by wealthy patient Victor Ziegler, where Bill is reunited with Nick Nightingale, an old medical school classmate who dropped out and now plays the piano professionally. An older Hungarian guest attempts to seduce Alice, and two young models attempt to seduce Bill. He is interrupted by his host, who had been having sex with Amanda, a young woman who has overdosed on a speedball. Mandy recovers with Bill's aid.

The following evening, while smoking marijuana, Alice and Bill discuss their episodes of unfulfilled temptation. Bill tells Alice he is not jealous of other men's attraction to her because he deems women naturally inclined to fidelity. She then discloses that during their vacation on Cape Cod, she encountered a Naval Officer and fantasized about him enough that she considered leaving Bill and their daughter. Bill is disturbed by Alice's revelation before being called to the house of a patient who has just died. The patient's distraught daughter, Marion, unsuccessfully tries to seduce Bill.

Upon leaving, he engages with a prostitute named Domino. Alice phones when they start kissing, prompting Bill to have a change of heart. He pays Domino for the sexless encounter and meets Nick at a jazz club. Nick describes an engagement where he must play piano blindfolded in events featuring beautiful women. Invitees require a costume, a mask and a password. Bill goes to a costume shop and offers the owner, Milich, a generous amount of money to rent a costume. Inside the shop, Milich is outraged when he catches his young daughter with two men.

Bill takes a taxi to the country mansion mentioned by Nick. He gives the password and discovers a sexual ritual is taking place. One of the masked women (later revealed to be Amanda) warns him he is in terrible danger. Bill is ushered to a crowded room and unmasked by the master of ceremonies. The woman who had tried to warn Bill intervenes and insists on redeeming him, at an undisclosed personal cost. The master asks her "Do you know what this entails?", and she confirms her willingness. Bill is let off with a warning not to tell anyone about what happened. 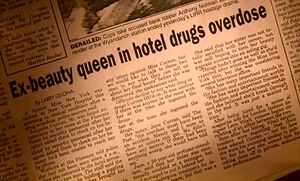 Bill discovers in the newspaper that Amanda was found dead in a hotel room due to an overdose.

Bill arrives home guilty and confused. He finds Alice laughing in her sleep and awakens her. She tearfully explains a dream in which she was having sex with the naval officer and many other men, and laughing at the idea of Bill witnessing the scene. The next morning, Bill goes to Nick's hotel. The desk clerk explains that a bruised and frightened Nick checked out hours earlier escorted by two dangerous-looking men. Bill returns the costume but seems to have misplaced the mask, and learns that Milich has sold his teenage daughter into sex slavery.

Bill calls Marion, but when her fiancé answers he hangs up. Bill heads to Domino's apartment, apparently having decided to consummate his affair. However, he is greeted by a woman who claims that she is Domino's roommate, Sally. There is obvious sexual tension between Bill and Sally but she then reveals that Domino had received just that morning the results of a test that indicated that she was HIV-positive. Bill leaves.

Returning home, Bill finds the rented mask on his pillow next to his sleeping wife. He breaks down in tears and tells Alice the whole truth of the past two days. The next morning, they go Christmas shopping with their daughter. Bill apologizes to Alice, and Alice muses that they should be grateful that their marriage and mutual love survived. She suggests that there is something they need to do "as soon as possible". When Bill asks what, she simply responds, "Fuck." 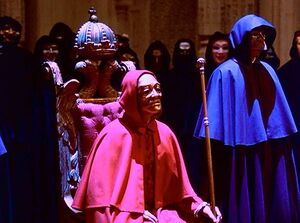 The film is laced with oculist symbolism, with mirrors, masks, magic circles, eight-pointed stars, ritual sex and sacrifices, the difference in light between the "Christmas tree lighted" outside world and the clear light of the secret world, and human sacrifices.

Very loosely based on the 1926 novella Traumnovelle (Dream Story) by Arthur Schnitzler, the movie transfers the story from early 20th-century Vienna to 1990s New York City.

Kubrick obtained the filming rights for Dream Story in the 1960s, considering it a perfect text for a film adaptation about sexual relations. He revived the project in the 1990s when he hired writer Frederic Raphael to help him with the adaptation. The film, which was mostly shot in the United Kingdom, apart from some exterior establishing shots, includes a detailed recreation of exterior Greenwich Village street scenes made at Pinewood Studios.

This page imported content from Wikipedia on 22.11.2021.
Wikipedia is not affiliated with Wikispooks.   Original page source here
Retrieved from "https://wikispooks.com/w/index.php?title=Eyes_Wide_Shut&oldid=233993"
Categories: