From Wikispooks
(Redirected from FDA)
Jump to navigation Jump to search

The regulatory agency charged with the safety of food and drug products. 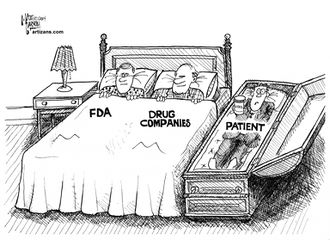 “The death blow to FDA's safety function was AZT. After that, any potentially deadly disease became an excuse for curtailing clinical trials. Death by medication was normalized as an inherent part of progress.”
Celia Farber (10 September 2021)  [1]

The FDA appears to be almost entirely captured by big pharma.

In 2008, the FDA decided that clinical trials conducted outside the United States no longer had to conform to the guidelines in the Declaration of Helsinki if used to support applications for registrations of products in the US.[2]

A 2013 the United States Supreme Court ruled, as summarised by Whiteout Press, "that if the FDA says something is safe, it doesn’t matter if that decision is wrong or the result of lies, fraud or deception on the part of the world’s pharmaceutical companies. And there’s no way to sue the FDA for being wrong and costing millions of unsuspecting Americans their lives."[3]

In 2017 it was an analysis in the Journal of the American Medical Association reported that almost 1/3 of new drugs approved by the FDA over a decade ended up years later with warnings about unexpected — sometimes life-threatening — side effects or complications.[4]

Speaking about fructose, Robert H. Lustig has charged that the FDA "will only regulate acute toxins, not a chronic toxin".[5]

80% of Pre-Packaged Foods in the USA contain chemicals which are banned in other countries.[6]

The FDA does not require that cosmetics be tested for health and environmental impacts. Manufacturers have been using nanoparticles for decades without such a health impact study, although claiming that they provide "anti-aging benefits".[7]

Phil Krause and ‎Marion Gruber will leave their positions in Autumn 2021.[8]