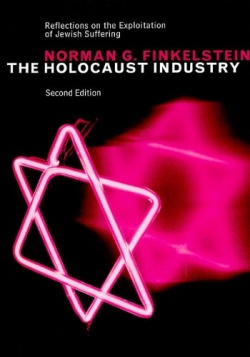 Review of The Holocaust Industry

The thrust of Professor Finkelstein's unsettling book is that powerful interests (Israel and Jewish organizations in America) have hijacked what has become known as the holocaust. And while Israel has exploited the holocaust as a weapon to deflect criticism, regardless how justified, American Jewish organizations have used the plight of supposedly needy survivors to extort staggering sums of money from the rest of the world. This was done not for the benefit of survivors, but for the financial advantage of these organizations.

There are no conclusions reached in Professor Finkelstein's book that a careful reader of daily newspapers could not have reached, assuming the reader could read between the lines and base his judgment on evidence and common sense rather than the politically correct slant of the media reporting.

Finkelstein has infuriated his critics not by ranting or raving or misrepresenting the evidence, as they have accused him, but by painstakingly supporting his arguments with irrefutable documentation. The first line of defense of the mass media in America, one of the holocaust industry's most effective and compliant tools (second only to the Clinton administration), was to pretend Finkelstein's book did not exist. Once this tactic became ineffective due to an outpouring of Internet exposure, the mass media launched scathing attacks on the author and his book. Read the New York Times book review for one such "hit piece" and compare that review with your own reading of the book. Naturally, reading the book is something the review is designed to discourage. 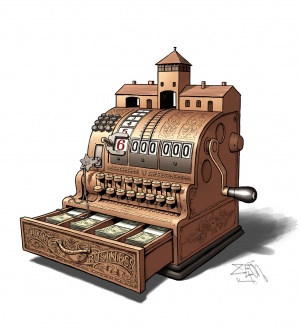 A zealous supporter of the holocaust industry, Professor Zweig from Tel Aviv, posted a negative "one star" review of Dr. Finkelstein's book on Amazon.com before the book was even available to the American public (July 19). This was no doubt a preemptive Internet strike to discourage potential readers without giving the book the publicity even a negative not-.com media review would have had. After Finkelstein was invited for a radio interview in the U.S., the holocaust industry enlisted Professor Zweig, who they doubtless consider a "heavy hitter," to join Finkelstein on the air and put the heretic in his place. An alternative explanation would be that Professor Zweig was given an opportunity to do penance and rehabilitate himself by debunking Finkelstein on the airwaves after it was discovered that the latter had cited information in Zweig's own book which blackens the holocaust industry.

In the ensuing debate, the best Zweig could do was claim that Finkelstein had taken statements made in his book out of context. This is the standard damage control employed by any public figure who said or wrote something he subsequently discovered was not in his best interest.

The bottom line of Finkelstein's book is that it says what was very long overdue to be said. But few academics have the courage or intellectual fortitude to weather the defamation campaign that will predictably descend on anyone who challenges this multi-billion dollar industry. Historically speaking, it has seldom been the politically correct Professor Zweigs of a given time that brought us closer to the truth, but the defiant and much-maligned "heretics" such as Norman Finkelstein.

I recommend the advice Nietzsche gave his readers 130 years ago: "If you want to know something about a book or its author, read what HE wrote rather than what his critics or enemies say about him." In addition to reading the book, I highly recommend listening to the radio debate between Professor Finkelstein and Professor Zweig, the holocaust industry's first choice to represent their side in the controversy. From the debate it becomes clear that Professor Finkelstein is extremely comfortable when dealing with the charges leveled against him by his detractors. He refutes them calmly and convincingly. No wonder the spokespersons for the holocaust industry prefer writing unopposed "hit pieces" like the New York Times review over challenging Professor Finkelstein directly... [1]