Gavin Christopher Newsom is a US politician and businessman who has been the governor of California since January 2019. He was chosen as a Young Global Leader by the World Economic Forum in 2005.

Newsom's first political experience came when he volunteered in the Willie Brown political machine in Brown's successful campaign for mayor in 1995.

From March 2020, Newsom was responsible for a protracted and strict lockdown and other measures in California, including mandatory use of face masks.

Showing what the really thinks of the danger, in November 2020, Newsom was caught dining indoors (formally a marquee) without a mask at the high-end French Laundry restaurant in Napa with a dozen other people, including lobbyist and friend Jason Kinney, in violation of his own restrictions that Newsom had placed on California restaurants. After being caught, he apologized.[4]

In February 2021, he again showed what he really thinks, when he ate at a restaurant in a county where indoor dining is prohibited. Formally, he was there to meet with the restaurant's owners who received a relief grant. According to his spokesperson, Newsom did not dine at the restaurant. However, social media observers noticed that behind the Governor was a table which had food and beverages and Newsom was allegedly inside the restaurant for over an hour.[5][6]

He survived a recall election on 14 September 2021. 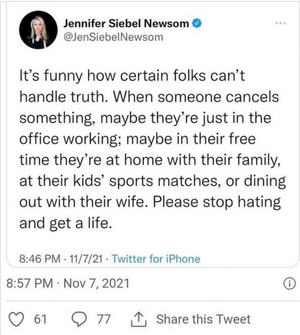 Newsom’s wife, Jennifer Siebel Newsom, tweeted — then quickly deleted — a message urging people to “stop hating” while her husband has been out of the public eye.

Newsom very likely got Gillian-Barre syndrome (GBS), a neurological disorder that can paralyze the face, shortly after his booster shot on October 27th 2021[7]. He dropped from public sight after the shot, including skipping the COP 26 climate summit, important for his peers, in favor of spending Halloween with his children.

Newsom and his family were Mexico from around November 22 to November 28 2021, possibly to get discreet stem cell treatment, a possible remedy for the GBS.[8]

In 2002, then San Francisco County Supervisor Newsom, by his own admission, participated in an assisted suicide, which violated state and federal laws. It was his mother, Tessa Thomas Newsom, 55, who suffered from advanced breast cancer.[9]