A "Holocaust Denier", contrary to what one might infer is not someone who denies that The Holocaust took place, but someone who questions whether it took place as described by the official narrative.

Use by Corporate media

Commercially-controlled media use this term similarly to the way they talk about "Antisemites" or "Nazis", i.e. as a disparaging exonym. It is essentially a rhetorical ad-hominem device to close down debate by demoising its target as somehow 'beyond-the-pale' and thus avoid dealing with substantive issues. Its use on Wikipedia pages dealing with people who publicly question any of the 3 main tenets of 'The Holocaust' is ubiquitous. 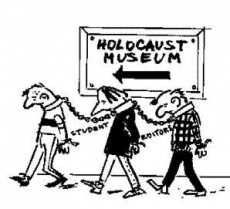