Hunter S. Thompson was a US writer and journalist. He founded the idea of gonzo journalism. He doubted the US government's 9-11 official narrative about the 19 men with box cutters and was writing an alternative account when he was found dead in 2005.

“America... just a nation of two hundred million used car salesmen with all the money we need to buy guns and no qualms about killing anybody else in the world who tries to make us uncomfortable”
Hunter S. Thompson [1]

After the September 11 attacks, Thompson voiced skepticism regarding the official story on who was responsible for the attacks. He speculated to several interviewers that it may have been a False flag conducted by the U.S. Government or with the government's assistance, though admitting he had no way to prove his theory.[2][3]

In 2004, Thompson wrote: "Nixon was a professional politician, and I despised everything he stood for — but if he were running for president this year against the evil Bush–Cheney gang, I would happily vote for him."[4]

Child abduction networks in the US

“The autumn months are never a calm time in America. Back to Work, Back to Football Practice, etc.... Autumn is a very Traditional period, a time of strong Rituals and the celebrating of strange annual holidays like Halloween and Satanism and the fateful Harvest Moon, which can have ominous implications for some people...

Autumn is always a time of Fear and Greed and Hoarding for the winter coming on. Debt collectors are active on old people and fleece the weak and helpless. They want to lay in enough cash to weather the known horrors of January and February. There is always a rash of kidnapping and abductions of schoolchildren in the football months. Preteens of both sexes are traditionally seized and grabbed off the streets by gangs of organized perverts who traditionally give them as Christmas gifts to each other to be personal sex slaves and playthings.

Most of these things are obviously Wrong and Evil and Ugly — but at least they are Traditional. They will happen. Your driveway will ice over, your furnace will blow up, and you will be rammed in traffic by an uninsured driver in a stolen car.

But what the hell? That's why we have Insurance, eh? And the Inevitability of these nightmares is what makes them so reassuring. Life will go on, for good or ill. But some things are forever, right? The structure may be a little Crooked, but the foundations are still strong and unshakable.”
Hunter S. Thompson [5] 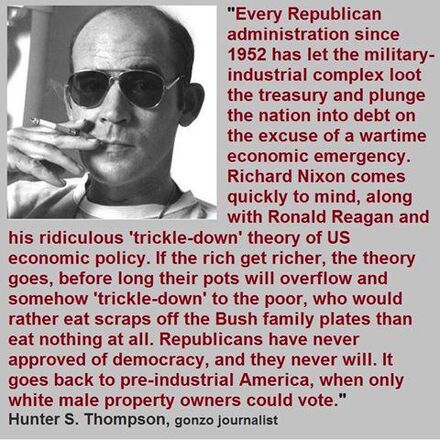 The New York Times headlined its reports of Thompson's death Hunter S. Thompson, 67, Author, Commits Suicide and termed him a "counter cultural hero".[7] As of June 2016, Wikipedia begins its short section on his death with the claim that Thompson " died from a self-inflicted gunshot wound to the head at Owl Farm".[8] He was working on a book about 9/11 when he died. At that time, criticism of the UC government's official narrative was comparatively rare.[citation needed]

A Quote by Hunter S. Thompson