James Rusbridger was a British author on international espionage during and after World War II and allegedly an MI6 operative. Son of Gordon Rusbridger, an Army colonel and cousin of Peter Wright, the MI5 whistleblower of 'Spy-Catcher' fame, James Rusbridger was an outspoken critic of the Official Secrets Act 1911 and doubted that the country derives any benefit from the vast sums spent on the intelligence services:

"Whether any intelligence does much good or actually enhances a country’s security is doubtful. After all, despite the success of Mossad, Israel still lives in a perpetual state of fear and terrorism. But the intelligence game is now an international affair where winning and point-scoring is the most important thing.

"No one dares ask whether any of it is worthwhile or could be done far more cheaply. The king must not been seen without his clothes."[1]

His career started in the naval design office of Vickers Armstrong. Then he was salesman and managing director of a commodities firm specialising in sugar, and claimed to have been paid by the CIA to weaken the international market for Cuban sugar. He was an Eastern Europe courier for MI6 from 1962, retiring in 1974.

His books mainly relate to World War II, but his letters and articles after retirement were critical of British and American SIS's. He once told CA: I cast a jaundiced eye over the profligate work of agencies like Britain’s MI5 and MI6 and the CIA and NSA, which has earned me considerable unpopularity from the British government.

He was a prolific writer of letters to editors of UK national newspapers and regarded as something of a thorn in the side of the UK security and intelligence services. 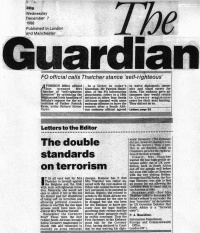 In his 1989 book "The Intelligence Game: The Illusions and Delusions of International Espionage", James Rusbridger wrote:

The government could well be accused of acting hypocritically over the Ryan affair. And indeed, on 7 December 1988, Patrick Haseldine, a Second Secretary in the Foreign Office, wrote to The Guardian accusing Mrs Thatcher of being soft on terrorism in connection with the case of four South African businessmen charged in 1984 with evading the ban on military exports to South Africa.

They had been released on £400,000 bail put up by the South African Embassy and then left the country, refusing to return to stand trial.

Haseldine alleged that Mrs Thatcher deliberately allowed them to return home because she did not want them on remand in prison during her talks with the South African President and Foreign Minister in June that year.

Whether the two cases are really similar is irrelevant to the fact that a member of the Foreign Office was willing to go public with a criticism that would almost certainly lose him his job and career.[2]

At the time of his death he was reported to be working on a book about the Royal Family, drafts and notes for which have never been made public.[3] In the weeks before his death James Rusbridger had acted as an expert witness for the defence in the trial of alleged KGB operative Michael Smith[4] and was expected to do so again at Smith's appeal against his conviction [5]

Rusbridger was found hanging from a beam in his loft wearing a diving suit at Jasmin cottage, his home on Bodmin Moor, Cornwall in February 1994. He was dressed in a green protective suit for use in nuclear, biological or chemical warfare, green overalls, a black plastic mackintosh and thick rubber gloves. His face was covered by a gas mask and he was also wearing a sou'wester. His body was suspended from two ropes, attached to shackles fastened to a piece of wood across the open loft hatch, and was surrounded by pictures of men and mainly black women in bondage. Consultant pathologist Dr Yasai Sivathondan said he died from asphyxia due to hanging "in keeping with a form of sexual strangulation".

Rusbridger wrote "up to a dozen letters a week to newspaper editors scourging the intelligence services and political egos."[6]