Not to be confused with MI6, which has more of a foreign focus.

MI5 (officially called "The Security Service") is a UK funded intelligence service with a focus on the UK.

MI5 is the internal "Security Service" of the UK State, based at Thames House, Millbank London on the North bank of the river Thames. Map Since 1989, its principal statutory basis is the "File:Security Services Act 1989.pdf". Its main responsibilities are "protecting the UK against threats to national security from espionage, terrorism and sabotage, from the activities of agents of foreign powers, and from actions intended to overthrow or undermine parliamentary democracy by political, industrial or violent means".

The following is from the UK National Archives - Intelligence Records section: [1]

"MI5 started life in March 1909 when, following a recommendation of the Committee of Imperial Defence, the Secret Service Bureau was founded by Captain Vernon Kell (K) and Captain Mansfield Cumming (C) who were responsible for counter-espionage and gathering overseas intelligence, respectively. The extreme secrecy surrounding its operations is reflected by the fact that the sole copy of the sub-committee report regarding its foundation was placed in custody of the Director of Military Operations at the War Office: CAB 16/232 . During August 1914 Kell and his small staff were absorbed into the Directorate of Military Operations as MO5 (g). The following year MO5 became part of the Directorate of Military Intelligence, assumed the title MI5, and was made responsible for upholding the provisions of the Defence of the Realm Regulations and the Aliens Restriction Act in the face of German espionage. Following the Bolshevik revolution in 1917 MI5 began to concentrate on the perceived threat of Communist subversion, which (together with Irish "terrorism") was to remain a principal theatre of operations until 1989."

"The majority of MI5 records are retained under section 3 (4) of the Public Records Act (1958). They remain exempt from disclosure under the Freedom of Information Act (2000). However, since 1999 approximately 2000 'historical' files have been transferred to The National Archives. These cover a wide range of subjects and individuals that have fallen under the purview of MI5 since its inception. These include files on MI5 operations during World War One; German spies and intelligence agents, renegades, double agent operations, espionage cases, Japanese, Hungarian and Italian intelligence agents, SOE agents, right-wing extremists and fascists, Soviet intelligence officers, communist 'front' organisations, pacifists and refugees; German and Soviet intelligence operations, the ARCOS raid and British fascism; the History of the Security Service, the 'Curry Report' and MI5 section history's; Soviet, Pro-Nazi and Zionist organisations; Jeffrey Hamm, compromised SOE agents and investigation of leaks of information to German intelligence." 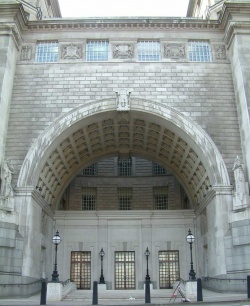 The Millbank Entrance to Thames House

The scope is MI5's activities is obscured somewhat by the deep state control of corporate media. In March 2018, the UK government admitted that agents were permitted to carry out criminal activity in the UK, but did not reveal the extent of criminality permitted.[2]

Details of the bugging were due to appear in Professor Christopher Andrew's 2009 official history of MI5, The Defence Of The Realm, but were removed at the insistence of the Cabinet Office. [3] The official narrative of MI5 was established with the publication in 2009 of Defence of the Realm, the first authorised history of MI5, which claimed that, while MI5 kept a file on Harold Wilson from 1945, when he became an MP – because communist civil servants claimed that he had similar political sympathies – there was no bugging of his home or office, and no conspiracy against him.[4] However in 2010 newspaper reports made detailed allegations that the bugging of 10 Downing Street had been omitted from the history for "wider public interest reasons".

The Mail on Sunday reported in April 2010 that MI5 bugged Downing Street under five UK Prime Ministers between 1963 and 1977. The bugs were initially ordered by Prime Minister Harold Macmillan. After a brief gap they were reinstated by his successor, Alec Douglas-Home. It is not clear whether Edward Heath and Harold Wilson were told of the surveillance. Historian Stephen Dorrill suggests this revelation appears to justify Wilson's belief that he was being spied on.[5]

The surveillance was ended on the orders of Prime Minister James Callaghan in 1977. Callaghan nevertheless denied in the Commons that No. 10 had ever been bugged.[6]

In 1963 on Harold Macmillan's orders following the Profumo Affair MI5 bugged the cabinet room, the waiting room, and the prime minister’s study until the bugs were removed in 1977 on Jim Callaghan's orders. From the records it is unclear if Harold Wilson or Edward Heath knew of the bugging.[7] Professor Andrew had previously recorded in the preface of the history that "One significant excision as a result of these requirements (in the chapter on The Wilson Plot) is, I believe, hard to justify" giving credence to these new allegations.[8] However Wright declined to let them see the files on Wilson and the plan was never carried out but Wright does claim it was a 'carbon copy' of the Zinoviev Letter which had helped destabilise the first Labour Government in 1924.

Once a new Government has been formed MI5 briefs the incoming PM on any Ministerial appointments it thinks may be of concern to "national security". MI5's Director General, Stephen Lander told Radio 4: "In 1997 therefore the way the then cabinet secretary and I agreed we would deal with it... was that I would produce the summaries, one sheet for each of the individuals that we thought we should make a comment on... and if the prime minister said I'm thinking of making X secretary of state for defence, they [the cabinet secretary and the prime minister's principal private secretary] would say 'well prime minister, you might like to read this from the security service'." [9]

In 2007, The Scotsman claimed that documents had provided "the first incontrovertible evidence that the state spied on the SNP in the 1950s". The documents showed that "Agents from MI5 and Special Branch infiltrated the party as part of a campaign to undermine support for Scottish independence".[10]

Cathy Massiter was in charge of MI5's surveillance of CND from 1981 to 1983. She resigned and stated that her work was not justified by any security threat posed by the group, but was political in nature and therefore illegal.[11] No one is known to have been disciplined in this regard, but Richard Norton-Taylor wrote in 2001 that the government never bothered to challenge Massiter's 1985 revelations.[12] 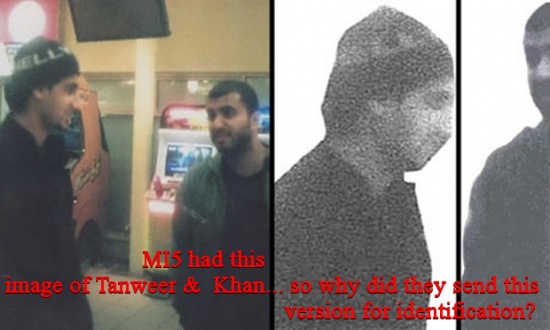 Why would someone deliberately so obfuscate a photograph before sending it for identification?

Andrew Parker lead MI5's response to the 7/7 attacks.[14] MI5's legal team argued that by law only "brief, neutral and factual" verdicts can be recorded, leading to charges that they were attempting to gag justice by restricting the verdicts of the inquests into the victims of the 7 July attacks.[15] In 2011, it emerged[16] that at the inquest into the deaths of the 7/7 victims, it emerged that in April 2004 an unnamed senior officer in the security services had sent a photo of Mohammad Sidique Khan and Shehzad Tanweer to USA, supposedly in an effort to identify them. Rather than send the original photo, however, he cropped it, added noise, decreased the contrast, and rendered it in black and white. When asked why, an anonymous 'Agent G.' suggested that the aim might have been to get them identified "as speedily as possible". G insisted that it would be "nonsensical and offensive" to suggest that MI5 had failed to act to prevent an attack that they "supposed or hypothesised" was coming.[16]

The May 2009 Commons intelligence and security committee inquiry into the preventability of 7-7 noted that the (above) butchered black and white photo of Tanweer was observed to be of "poor quality", and that 'Agent G' suggested that it was probably deemed too poor even to forward. The Guardian notes dryly that "The committee appears not to have been aware of the original, very clear, colour photograph of both men."[16]

Keelan Balderson supports Tom Secker's research into the 2005 London bombings. He writes about Secrets, Spies and 7/7 that "at the very least the book demonstrates that the authorities have lied about and distorted the amount of data they had on Khan. MI5 refused to cooperate and downplayed any wrongdoing. At the inquest they sent a non-operational employee with no 7/7 experience who was allowed to remain anonymous. Plain and simply there is a cover-up. But a cover-up of what?"[17]

In February 2010, the Security Service was sharply criticised in a draft judgement by the Master of the Rolls (head of the Court of Appeal) Lord Neuberger over its role in the case of Guantanamo detainee Binyam Mohamed:

as the evidence in this case showed, at least some SIS officials appear to have a dubious record when it comes to human rights and coercive techniques, and indeed when it comes to frankness about the UK's involvement with the mistreatment of Mr Mohammed by US officials. I have in mind in particular witness B, but it appears likely that there were others.[18]

In July 2006, parliamentarian Norman Baker accused the British Government of "hoarding information about people who pose no danger to this country", after it emerged that MI5 holds secret files on 272,000 individuals — equivalent to one in 160 adults.[19] It was later revealed that a "traffic light" system operates:[20][21]

Since 1993, MI5 has released the name of Director General of MI5, and their website features a comprehensive list.[22] The names of the Deputy Directors General are not however released and remain a matter of some conjecture. A common pattern is that the DDG goes on to become DG.[23]

According to the MI5 website, the Director General, Deputy Director General and Legal Advisor make up the Management Board of the Service, along with seven branch Directors. The board is supplemented by two Non-Executive Directors from outside the Service in an advisory role.[25]

There are some differences between the two accounts. According to the website, international counter-terrorism and counter-espionage are the the responsibility of a single branch, suggesting that Hollingsworth and Fielding's D and G branches may have been merged or re-organised. The website also lists a separate Information Services and Technology Capability branch, suggesting that information technology may have been separated from H Branch.

A document sourced from MI5 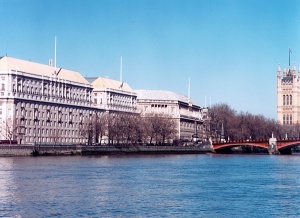