KTH Royal Institute of Technology is a public research university in Stockholm, Sweden. KTH conducts research and education within engineering and technology, and is Sweden's largest technical university.[1] Currently, KTH consists of five schools with four campuses in and around Stockholm.

KTH was established in 1827 as Teknologiska Institutet (Institute of Technology), and had its roots in Mekaniska skolan (School of Mechanics) that was established in 1798 in Stockholm. But the origin of KTH dates back to the predecessor to Mekaniska skolan, the Laboratorium Mechanicum, which was established in 1697 by Swedish scientist and innovator Christopher Polhem. Laboratorium Mechanicum combined education technology, a laboratory and an exhibition space for innovations.[2] In 1877 KTH received its current name, Kungliga Tekniska högskolan (KTH Royal Institute of Technology). The King of Sweden

KTH is the highest ranked technical university in Sweden. 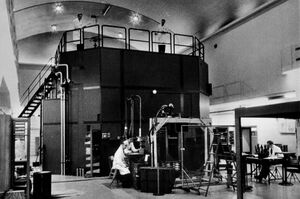 After the American deployment of nuclear weapons at the end of World War II, the Swedish military leadership recognized the need for nuclear weapons to be thoroughly investigated and researched to provide Sweden with the knowledge to defend itself from a nuclear attack. With the mission to "make something with neutrons", the Swedish team, with scientists like Rolf Maximilian Sievert, set out to research the subject and eventually build a nuclear reactor for testing.

After a few years of basic research, they started building a 300 kW (later expanded to 1 MW) reactor, named Reaktor 1 (R1), in a reactor hall 25 meters under the surface right underneath KTH. Today this might seem ill-considered, since approximately 40,000 people lived within a 1 km radius. It was risky, but was deemed tolerable since the reactor was an important research tool for scientists at the Royal Swedish Academy of Engineering Sciences (Ingenjörsvetenskapsakademien).

At 18:59 on 13 July 1954, the reactor reached critical mass and sustained Sweden's first nuclear reaction. R1 was to be the main site for almost all Swedish nuclear research until 1970 when the reactor was finally decommissioned, mostly due to the increased awareness of the risks associated with operating a reactor in a densely populated area of Stockholm.