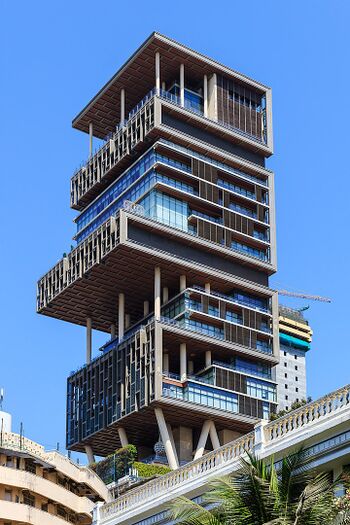 Antilia is a private residence in the billionaires row of Mumbai, named after the mythical island Antillia. It is the residence of the Indian billionaire Mukesh Ambani and his family, who moved into it in 2012. The skyscraper-mansion is one of world's largest and most elaborate private homes, at 27 stories, 173 metres (568 ft) tall, over 37,000 square metres (400,000 sq ft), and with amenities such as three helipads, a 168-car garage, a ballroom, 9 high speed elevators, a 50-seat theatre, terrace gardens, swimming pool, spa, health centre, a temple, and a snow room that spits out snowflakes from the walls. As of 2014, it was considered the world's most expensive private residence costing between US$1 and 2 billion to build.

Mukesh Dhirubhai Ambani is an Indian billionaire businessman, and the chairman, managing director, and largest shareholder of Reliance Industries Ltd. (RIL), a Fortune Global 500 company and India's most valuable company by market value.[1] According to Forbes, he is the richest person in Asia with a net worth of US$98 billion[2] and the 11th richest person in the world, as of 15 January 2022.

In 1981 he started to help his father Dhirubhai Ambani run their family business, Reliance Industries Limited. By this time, it had already expanded so that it also dealt in refining and petrochemicals. The business also included products and services in retail and telecommunications industries. Reliance Retail Ltd., another subsidiary, is also the largest retailer in India.[3]