Nicholas deBelleville "Nick" Katzenbach was a US deep state actor who assisted the cover up of the JFK assassination.

As Deputy Attorney General Nicholas Katzenbach sent a memo on November 25 1963 to Bill Moyers arguing that it was important then to persuade the public that "Oswald was the assassin," and that "he did not have confederates."[1]

A Document by Nicholas Katzenbach 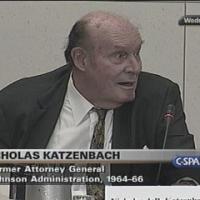