1965 saw the US commit ground troops to Vietnam, following up on the casus belli of the faked Gulf of Tonkin incident the previous August.

After the mendacious Gulf of Tonkin incident, on February 9, 1965, the United States deployed its first combat troops to South Vietnam, significantly escalating its role in the war.

Perhaps 1,000,000 Indonesians were murdered in the aftermath. 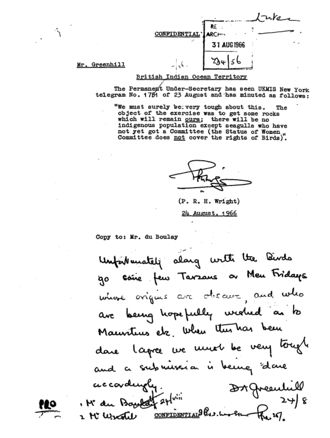 UK diplomatic cable in which D.A. Greenhill refers to the Chagos Islanders as "Tarzans of Men Fridays"

In 1965, the UK granted independence to Mauritius, and paid £3m as compensation for its continued occupation of the Chagos Archipelago.[1]