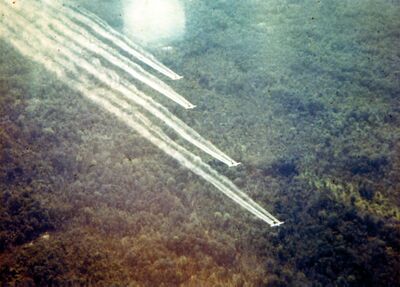 Operation Ranch Hand was a large-scale U.S. military chemical weapons operation during the Vietnam War. Agent Orange, the chemical weapon most notably used, was officially classified as a defoliant, and the US military has always denied it was intended against people. Its stated primary purpose was strategic deforestation, destroying the forest cover and food resources necessary for the implementation and sustainability of the Vietnamese style of guerilla warfare. Agent Orange, with its extremely toxic dioxins, was sprayed over 4.5 million acres of land in Vietnam from 1961 to 1971.

Hindsight corrective studies indicate that previous estimates of Agent Orange exposure were biased by US government intervention and under-guessing, such that current estimates for dioxin release are almost double those previously predicted.[2]

The issue of whether or not to allow crop destruction was under great debate internally in the US government due to the awareness that it very well might violate the Geneva Convention.[3] However, American officials pointed out that the British had previously used 2,4,5-T and 2,4-D (virtually identical to America's use in Vietnam) on a large scale throughout the Malayan Emergency in the 1950s in order to destroy bushes, crops, and trees in effort to deny communist insurgents the cover they needed to ambush passing convoys.[4] Indeed, Secretary of State Dean Rusk told President Kennedy on 24 November 1961, that "[t]he use of defoliant does not violate any rule of international law concerning the conduct of chemical warfare and is an accepted tactic of war. Precedent has been established by the British during the emergency in Malaya in their use of aircraft for destroying crops by chemical spraying."[5] The president of South Vietnam, Ngo Dinh Diem began to push the U.S. Military Advisory Group in Vietnam and the White House to begin crop destruction in September 1961, but it was not until October 1962 when the White House gave approval for limited testing of Agent Blue against crops in an area believed to be controlled by the Viet Cong.[6] Soon after, crop destruction became an integral part of the Ranch Hand program.

The herbicides were sprayed by the U.S. Air Force flying C-123s using the call sign "Hades". The planes were fitted with specially developed spray tanks with a capacity of 1,000 U.S. gallons (4 m3) of herbicides. A plane sprayed a swath of land that was 80 meters wide and 16 kilometers (10 mi) long in about 4½ minutes, at a rate of about 3 U.S. gallons per acre (3 m3/km2).[8] Sorties usually consisted of three to five aircraft flying side by side. 95% of the herbicides and defoliants used in the war were sprayed by the U.S. Air Force as part of Operation Ranch Hand. The remaining 5% were sprayed by the U.S. Chemical Corps, other military branches, and the Republic of Vietnam using hand sprayers, spray trucks, helicopters and boats, primarily around U.S. military installations.[9] 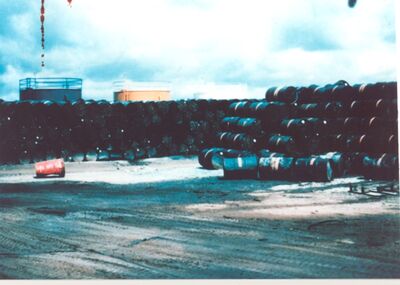 The ecological effects of Agent Orange have also been devastating in regards to their destruction of plant life as well as the coercive creation of ecological refugees. The physical ecology of Vietnam has been reported to continue to affect the daily lives of Vietnamese citizens, with studies concluding that exposures to Agent Orange as empirically verified by blood dioxin levels continue to pervade in the country due to dioxin persistence in soils, oftentimes moving into river sediment, fish, and finally into people via daily consumption. Studies in the Aluoi Valley, a village near a now-defunct military base that was operating between 1963 and 1966, confirmed this process of biological magnification, as contaminated soil acted "reservoirs" of TCDD Agent Orange toxin that would later transfer to fish and ducks and finally to humans, all via consumption.[10] The International Union for the Conservation of Nature concluded that "much of the damage can probably never be repaired".[11]

Official US military records have listed figures including the destruction of 20% of the jungles of South Vietnam and 20-36% (with other figures reporting 20-50%) of the mangrove forests.[12] An overall reduction in biomass, i.e. plant and animal populations, has been noted along with loss of soil nutrients and ecosystem productivity in terms of growth yields.[13] Forests that have been sprayed multiple times (estimates point to about a quantity of land equaling 0.5 million hectares) have extensively exacerbated ecological disadvantages; recovery times are dubious and "the plant and animal communities have been totally disrupted" due to "total annihilation of the vegetative cover".[13] The long-term effect of this deforestation continues to result in less aged foliage and mangroves being unable to grow from even a single spraying, with many patches of economically unviable grass colloquially referred to as "American grass".[12] Farm land that was destroyed in the process of militarization and the creation of battlefields produced an agricultural wasteland, forcing Vietnamese farmers to work with contaminated soil for more than 40 years.[14]

The use of Agent Orange is considered a "notorious example" of the expropriation of human environment for warfare, forcing the rural Vietnamese to move to cities as ecological refugees to survive because their crops and livelihood had been destroyed.[15] The late Harvard professor Samuel P. Huntington noted the impact of a doubling or tripling of the urban population shifted from majority rural populations directly because of the Vietnam War.[16] Later authors note that the use of Agent Orange in committing "ecocide" was crucial in this construction of the ecologically displaced refugee, i.e. individuals removed from their homes as a means of crafting a weaker and institutionally dependent government and mitigating "rural revolutionary forces".[17] 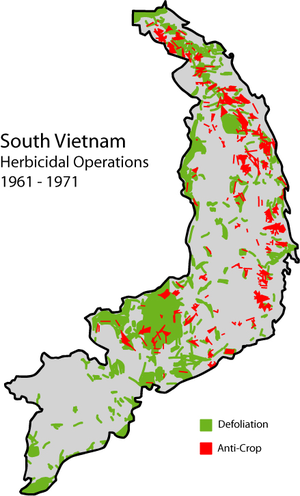 Map of herbicide usage during the Vietnam war.

The herbicides used were sprayed at up to 50 times the concentration than for normal agricultural use. The most common herbicide used was Herbicide Orange, more commonly referred to as Agent Orange: a fifty-fifty mixture of two herbicides 2,4-D (2,4-dichlorophenoxyacetic acid) and 2,4,5-T (2,4,5-trichlorophenoxyacetic acid) manufactured for the U.S. Department of Defense primarily by Monsanto Corporation and Dow Chemical. The other most common color-coded Ranch Hand herbicides were Agent Blue (cacodylic acid) that was primarily used against food crops, and Agent White which was often used when Agent Orange was not available.

The Agents used—known as the Rainbow Herbicides—their active ingredients, and years used were as follows:[18]

65% of the herbicides used contained 2,4,5-trichlorophenoxyacetic acid that was contaminated with 2,3,7,8-tetrachlorodibenzodioxin,[28] a known human carcinogen...by several different routes of exposure, including oral, dermal, and intraperitoneal".[29] About 12 million U.S. gallons (45,000 m3) of dioxin-contaminated herbicides were sprayed over Southeast Asia during American combat operations.[30]

In 2005, a New Zealand government minister was quoted and widely reported as saying that Agent Orange chemicals had been supplied from New Zealand to the United States military during the conflict. Shortly after, the same minister claimed to have been mis-quoted, although this point was less widely reported. From 1962 to 1987, 2,4,5T herbicide had been manufactured at an Ivon Watkins-Dow plant in New Plymouth.[31][32][33][34]

The first aerial spraying of herbicides was a test run conducted on 10 August 1961 in a village north of Đắk Tô against foliage.[35] Testing continued over the next year and even though there was doubt in the State Department, the Pentagon and the White House as to the efficacy of the herbicides, Operation Ranch Hand began in early 1962. Individual spray runs had to be approved by President John F. Kennedy until November 1962, when Kennedy gave the authority to approve most spray runs to the Military Assistance Command, Vietnam and the U.S. Ambassador to South Vietnam. Ranch Hand was given final approval to spray targets in eastern Laos in December 1965.

Targets for the spray runs were carefully selected to satisfy the strategic and psychological operations goals of the U.S. and South Vietnamese military. Spray runs were surveyed to pinpoint the target area and then placed on a priority list. Due to the low altitude (ideally 150 feet (46 m)) required for spraying, the C-123s were escorted by fighter aircraft or helicopter gunship that would strafe or bomb the target area in order to draw out any ground fire if the area was believed to be 'hot'. Spray runs were planned to enable as straight a run as possible to limit the amount of time the planes flew at low altitude. Data on the spray runs, their targets, the herbicide used and amount used, weather conditions and other details were recorded and later put into a database called the Herbicide Reporting System (HERBS) tapes.

The effectiveness of the spraying was influenced by many factors including weather and terrain. Spray runs occurred during the early morning hours before temperatures rose above 85 degrees and the winds picked up. Mangroves in the Delta region required only one spraying and did not survive once defoliated, whereas dense forests in the uplands required two or more spray runs. Within two to three weeks of spraying, the leaves would drop from the trees, which would remain bare until the next rainy season. In order to defoliate the lower stories of forest cover, one or more follow-up spray runs were needed. About 10 percent of the trees sprayed died from a single spray run. Multiple spraying resulted in increased mortality for the trees, as did following up the herbicide missions with napalm or bombing strikes.[36]