In the 1950s, according to Peter Dale Scott, Wall Street was "a dominating complex."[1] After the US deep state secured legislative approval for the CIA in 1947, the agency had quickly begun to exceed its vague limitations, until by the 1950s it was ready to undertake ambitious projects such as influencing elections, organising assassinations or coups around the globe.

The Cold War is the backdrop without which other events in the 1950s cannot be understood. The USSR and its empire formed the kernel of a potent enemy image which unified people in fear. In 1951 the US government charged Julius and Ethel Rosenberg with spying and sentenced them to death. They were killed by electrocution in 1953. 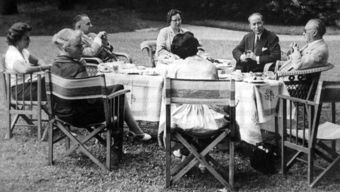 The fear and perceived need for secrecy lead to a number of deep state milieux being formed in the 1950s, of which the two most important are probably Le Cercle and the Bilderberg. 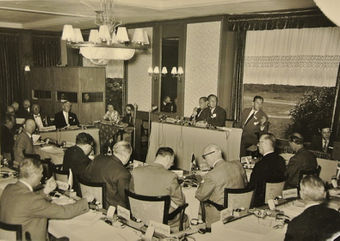 Originally a French speaking deep state milieu, Le Cercle was set up in the early 1950s. Always a very secretive organisation, this evolved into a series of biannual meetings, alternative in US and the oether side of the Atlantic. Its activities include arms dealing and subversion of elected governments.

By his own account, to offset "a growing distrust of America" Józef Retinger "approached H.R.H. Prince Bernhard, Dr. Paul Rykens and M. Paul van Zeeland" with the idea of establishing unofficial secret meetings. As a result, in 1954, 68 men met at the Bilderberg Hotel. This evolved into an annual event. The group pushed the European Union and was pro-NATO from the start. The group would secure control over various significant positions, including NATO Secretary General in 1966. The group's surmised activities in the 1970s include organising the Yom Kippur War as a pretext for the 1973 Oil Crisis. In the 1990s the group was to prove important in creating the Euro.

The CIA began to carry out acts of terror and subversion abroad, to further what it claimed was the US "national interest". In practice, this seemed to correspond extremely closely with the interests of the small group who were making decisions about what to do - perhaps unsurprising given that there was little effective oversight. Peter Dale Scott argues that the 1950s CIA is well understood as the action arm of Wall St.[1]

In 1951 the popular Iranian leader, Mohammad Mosaddegh, announced his plan to nationalise the UK and US oil industries. As a response, the Seven Sisters sought to ptorect their oil profits by inviting the CIA and MI6 to use underhand means to topple his government. The Iran/1953 coup d'état was effected in August 1953.[2] This was the first of many such regime change operations carried out by the CIA.

United Fruit were anxious to keep their huge land holding without paying much in the way of taxes, and sought help from the CIA. "Operation Success" ended the land reform policy by toppling the government of Jacobo Árbenz. The CIA repeatedly denied responsibility for this until 1997.