Dr. Scott Bennett, formerly of the U.S. Army 11th Psychological Operations Battalion, attempted to blow the whistle by contacting the commercially-controlled media and writing to US politicians after being sacked from his job as terrorist finance investigator after he proved too zealous at the job. "He has developed and managed psychological warfare theories, products, and operations for U.S. Special Operations Command, U.S. Central Command, the State Department Coordinator for Counterterrorism, and other government agencies." He was a Research Fellow at the Heritage Foundation.[1]

Scott Bennett had a background in advertising, before being fast tracked into the US military PSYOPS division, receiving a Direct Commission as an Officer, and held a Top Secret/Sensitive Compartmentalized Information (TS/SCI) security clearance. He was awarded a B.S. in Advertising from George Mason University, an M.A. in International Business and Public Policy from San Jose State University and a Ph.D. in Political Theory from The Catholic University of America.[2]

Explaining his move to investigating terrorist financing, in his deposition to Congress, Bennett writes: "I was tasked with interviewing all the different agency teams to discover their particular expertise in Terrorist Threat Finance, and formulate recommendations to improve their functionality. This meant identifying duplicative and unproductive operations within the agencies, developing plans and timetables for eliminating them, and synthesizing the best practices and expertise of the various government and military agencies into my Booz Allen team... I was repeatedly blocked and discouraged from delving too deep or being too aggressively creative."[3]

By Bennett's account, he was fitted up with spurious charges, which lead to his being imprisoned with fellow whistleblower Brad Birkenfeld. After some period of puzzling over documents to which Birkenfeld had access[How?], Bennett's experience at tracking terrorist financers allowed him to understood the connections. Birkenfeld was later awarded over $100M as a whistleblower in connection with the 19,000 bank accounts which he had discovered while investigating money laundering at UBS. 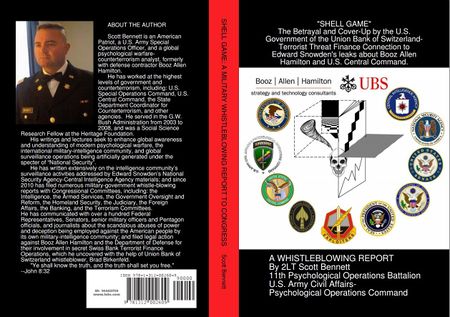 Bennett's whistleblowing was about the State of California child support agencies charging 10% on arrears without informing paying fathers. He reported this but states that it was not fixed but instead "covered up and buried". He reports that he was criticised for his whistleblowing action.[4]

The first report he submitted to congress warned of the impending 2012 Benghazi attack in Libya, which later happened, killing US ambassador John Christopher Stevens.

The second report Bennett submitted to congress concerned complicity by banks in terrorist financing, and how civilian US Government officials conspired to cover this up.[3]

Attempts to blow the whistle

Bennett compiled a large report based largely on the material given him by Brad Birkenfeld, but combined with his own experience. No one in the military was interested enough to get back to him, nor was Dianne Feinstein, chair of the United States Senate Select Committee on Intelligence. No one in the commercially-controlled media expressed any interest in his revelations.

On memorial day, May 27, 2013, Bennett submitted an 83 page "whistleblowing report to the United States Congress". It was entitled "Shell Game: The Betrayal and Cover-up by the U.S. Government of the Union Bank of Switzerland-Terrorist Threat Finance Connection to Booz Allen Hamilton and U.S. Central Command".[3]

On 1st October, 2014, Bennett was interviewed by Kerry Cassidy of Project Camelot.[5] While in prison, he was interviewed by two reporters from the commercially-controlled media for a story about security clearances. He spoke for about 2 hours. Subsequently, about 3 lines were written about him, not including mention of the events he had testified about.[4] Due to lack of corporate media coverage, he was deemed "not notable" by Wikipedia. He has spoken on PressTV.[6]

A Document by Scott Bennett