The word "terrorist" is an exonym and powerful enemy image, associated with the concept of "terrorism".

"A terrorist is someone who commits an act of terrorism." So far, so good, but what is "terrorism"? Authorities are seem pretty much agreed that "terrorism is whatever we say it is". The official narrative doesn't mention false flag terrorism,

The word "terrorist" is very emotionally charged, and so the decision about who is and isn't is at least emotionally (and perhaps also legally) highly significant. Since there is no widely accepted definition of what "terrorism" is (and some have even called for the word to be abandoned), this means that the field is fraught with difficulty and inevitably has a subjectivity which is seldom respected by the commercially-controlled media. South African President Nelson Mandela, for example, was only removed from the US list of terrorists in 2008, some 15 years after having been awarded the Nobel Peace prize.[1]

The "war on terror", rolled out by the deep state and the Military-industrial-congressional complex after the end of the cold war, can be understood as a continuation of the "war of terror", a strategy of tension to promote fear amongst the populace.[2]

Not only does the "War on Terror" promote fear of attack by terrorists, but also fear of being victimised as a terrorist, for non-violently holding a dissenting opinion. An FBI memo entitled "Potential Indicators of Terrorist Activities Related to Sleepers" says that people who should be "considered suspicious" include those who hold are sympathetic to "Conspiracy theories about Westerners", specifically citing as an example that "the CIA arranged for 9/11 to legitimize the invasion of foreign lands"[3] - including a large proportion of the world population.[4]

A large proportion of terrorist acts are "False flags", i.e. not carried out by those who claim to have carried them out. A common pattern is to use such incidents as a pretext for war. The US population, for example, in Summer 2001 was not willing to wage a war of aggression, but the 9-11 attacks changed that. It is hard to be authoritative about the proportion of terrorist incidents which are false flags, but it is a safe bet that the proportion is more than let on by the commercially-controlled media - who have shown themselves the servants of the deep state groups responsible for a lot of the world's terrorism. 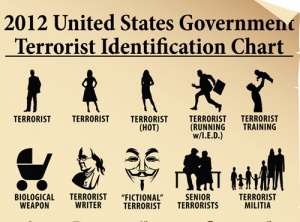