Southeast Asia or Southeastern Asia is the southeastern subregion of Asia, consisting of the regions that are geographically south of China, east of the Indian subcontinent and north-west of Australia.[1] Southeast Asia is bordered to the north by East Asia, to the west by South Asia and the Bay of Bengal, to the east by Oceania and the Pacific Ocean, and to the south by Australia and the Indian Ocean.

The region has a diverse mix of economies from the highly developed and globally competitive financial market of Singapore, which ranks highly worldwide in education, healthcare, human development, life expectancy and quality of life, to the much less developed economies such as Cambodia, East Timor and Myanmar, while also including medium-sized economies such as Malaysia, Thailand and Vietnam. The largest and most populous country in Southeast Asia is Indonesia, and the largest city is Jakarta.

Southeast Asia lies near the intersection of geological plates, with both heavy seismic and volcanic activities. The Sunda Plate is the main plate of the region, featuring almost all Southeast Asian countries except Myanmar, northern Thailand, northern Laos, northern Vietnam, and northern Luzon of the Philippines. The mountain ranges in Myanmar, Thailand, and Peninsular Malaysia are part of the Alpide belt, while the islands of the Philippines are part of the Pacific Ring of Fire. Both seismic belts meet in Indonesia, causing the region to have relatively high occurrences of earthquakes and volcanic eruptions. 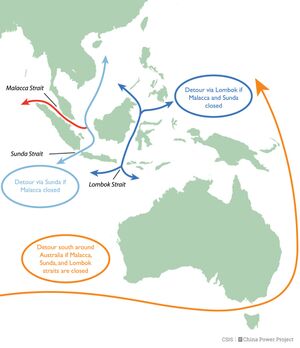 South East Asia have some of the most important straits in the world.

It covers about 4,500,000 km2, which is 10.5% of Asia or 3% of Earth's total land area. Its total population is more than 655 million, about 8.5% of the world's population. It is the third most populous geographical region in Asia after South Asia and East Asia.[2] The region is culturally and ethnically diverse, with hundreds of languages spoken by different ethnic groups. Almost all Southeast Asian populations are genetically related to East Asians, adding on to the close cultural and religious similarities.[3] Ten countries in the region are members of the Association of Southeast Asian Nations (ASEAN), a regional organization established for economic, political, military, educational and cultural integration amongst its members, as well as with neighbouring countries in East Asia (APT).[4]