Sungkyunkwan University is a private comprehensive research university in South Korea. The institution traces its origins to the historic Sungkyunkwan, founded in 1398 and located in the heart of central Seoul.[1] As the foremost educational institution of the Joseon dynasty, it was governed by the great code of the state administration[2] with royal assent.[3] It was restructured into a comprehensive university in the late 19th century, and has since greatly expanded its course offerings. It is widely regarded as one of the most prestigious private universities in South Korea, notable for its numerous influential alumni, strong research output, and close partnership with Samsung.

The university spends heavily on research and development, mostly sponsored by Samsung, Hyundai and other government agencies, producing high-end research scientists. Among the university's internationally renowned research scientists include chemical engineering professor Park Nam-Gyu, who was named as a contender for the Nobel Prize in Chemistry in 2017 by Clarivate Analytics,[4] and physics professor Lee Young-hee, director of the Center for Integrated Nanostructure Physics in the Institute for Basic Science. Both scientists frequently appear in Nature.[5]

The university's main campus, the Humanities and Social Sciences Campus, is in the heart of central Seoul on the same hill as Changdeokgung and Changgyeonggung (two of the royal palaces of Joseon). It is near Hyehwa-dong and Daehangno. The nearest subway station is Hyehwa Station on Seoul Subway Line 4.

Each campus's major is divided according to the distinction between liberal arts and science departments. 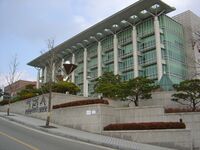 Sungkyunkwan was established in 1398 as the Joseon Dynasty's highest educational institution. Its name means, "Sung (成, to make), Kyun (均, harmonious society), Kwan (館, institute)." It focused on in-depth study of the Chinese Classics, Confucian canon, and literature of the era, and how to apply the knowledge to governing the nation and understanding the nature of humanity. It also served as a shrine (see Munmyo) to the Confucian sages where rituals were held regularly to honor them and their teachings.

It was located within the city walls of the capital during the Joseon period, Hanseong, or modern-day Seoul. It followed the example of the Goryeo-period Gukjagam, which in its latter years was also known by the name "Sungkyunkwan".

Numerous Korean historical figures, including Yi Hwang and Yi I, studied at and graduated from Sungkyunkwan. A considerable amount of Korean literature and works of hanja calligraphy were created and archived by Sungkyunkwan scholars over the centuries.

During the period of Japanese rule in the first half of the twentieth century, Sungkyunkwan was downgraded and almost closed by the Governor-General of Korea in favor of the imperial university. At the end of World War II, however, it was officially reopened as a college by the United States Army Military Government in Korea. Before long, it was reinstated by the ex-rector of Sungkyunkwan, Kim Changsook.

After the Korean War, as the nation modernized and underwent social, political, and economic reforms, SKKU played an important role in academic freedom in higher education and also kept traditional ethics and morality alive in Korean society. 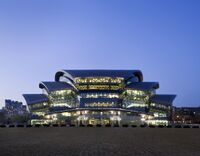 Samsung partnered with SKKU in the period of 1965-1977 and renewed the partnership in 1996. The partnership has helped SKKU realize its vision in pursuit of globalization and fostering talented graduates.[6] Through the partnership, SKKU has developed high-quality research infrastructure and achieved excellent human resource management. The partnership also enabled SKKU to develop world-leading academic programs in software development, mobile communications engineering, energy engineering, nanotechnology, business, medicine, and law.[7]