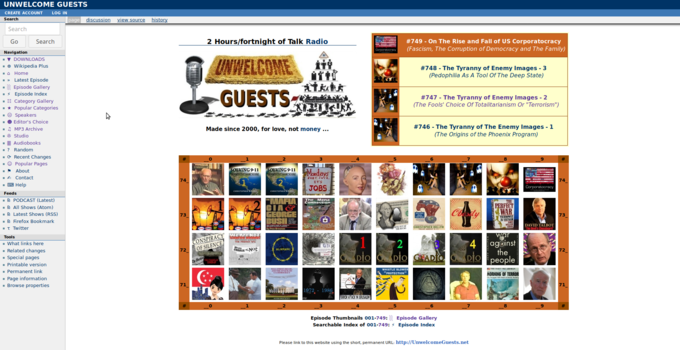 
Owner: Robin Upton  (A Wikispooks editor)
In its own words:
"A program about wealth, power, and peoples' resistance to the corporate world order."
Constitutes: Podcast,  Independent media

Unwelcome Guests is a radio show started by Lyn Gerry, a former Pacifica radio presenter disillusioned by the influence of corporate money over the station's output.

Shows last 2 hours and typically include a variety of speakers, often academics, whistleblowers, authors and/or activists on a range of topics lacking from commercially-controlled media. Originally weekly, the shows later became fortnightly and then monthly. The last show produced was episode #749, produced in July 2018.

The show was originally distributed at Radio4All.net, a site run by the show's producer, Lyn Gerry. When Robin Upton took over the show in 2010, he created a bespoke website at http://www.UnwelcomeGuests.net. Produced weekly since 2000, the show the show has been produced irregularly since the Summer of 2016.

The Unwelcome Guests team have adapted various films and videos, including Alan Francovich's Gladio film, Adam Curtis' Century of The Self,[1] The Power of Nightmares,[2] The Trap[3] etc. As of 2019, the most popular episode was #680,[4] which adapated the film was Unlawful Killing,[5] a film about the premature death of Diana Spencer which was adapted in 2014.[6]

In 2015, the Unwelcome Guests collective adapted Alan Francovich's film about Operation Gladio for radio. The radio adaptation, which involved around a dozen volunteers was broadcast in 4 parts over 2 months.[7][8][9][10] As of 2018, it remains some of the most popular episodes of the show.[11]

In December 2015, the site facilitated mass downloads by publishing the following zipped archives of many episodes: