In the 1920s and 1930s, there were several attempts to develop a German version of Ford's Model T, a cheap car for the common people. In 1934, soon after the Nazi party seized power, Adolf Hitler became involved, ordering the production of a basic vehicle capable of transporting two adults and three children at 100 km/h (62 mph). He wanted all German citizens to have access to cars. At that time, there was only one motor-car for every fifty persons (compared to one for every five in America).

It soon became apparent that private industry could not turn out a car for only 990 RM (US$396 in 1938 dollars). Thus, Hitler chose to sponsor an all-new, state-owned factory using Ferdinand Porsche's design.

A huge advertising campaign was launched to persuade workers to put aside part of their wages to save up for one, with the slogan "a car for everyone". This idea caught the public's imagination, and over 330,000 workers applied to buy a Volkswagen car. In contrast to universal hire-purchase practice, the scheme provided for delivery only after payment of the last installment.

In 1938 a factory was built at Fallersleben (Wolfsburg) to produce it, but very few cars were delivered to the purchasers before the Second World War halted civilian production. Not a single car was produced for those 330,000 workers who had paid in their money to the German Labour Front. [1]

During the war the Volkswagen factory produced the Kübelwagen and the amphibious Schwimmwagen. It also produced parts for VI Flying Bombs[2]. Some of the labour force came from the Arbeitsdorf Camp. The company later admitted that it used 15,000 slaves during the war effort. German historians has estimated that 70% of Volkswagen's wartime workforce were supplied by slave labor, mostly Eastern Europeans[3] Some of the Volkswagen executives were sentenced to death at the Nuremberg Tribunals because of the working conditions.

In the summer of 1945 the British Army took over control of the Volkswagen factory. The original intention was to dismantle the entire production line and ship out the machinery and tooling as reparations. Colonel Charles Radclyffe, who was in charge of car manufacture in the British zone, was responsible for carrying out this plan. However, when the Volkswagen equipment was offered to Britain's motor manufacturers, they turned it down, as quite unattractive to the average buyer... To build the car commercially would be a completely uneconomic enterprise." [4]

In late 1946 to mid-1947, US and British dismantling policy changed as part of the new Cold War.

In 1947 Colonel Radclyffe decided that a suitable German must be found to take over the company. It was suggested by Major Hirst that he should recruit Heinrich Nordhoff, who had worked as a production manager at Opel, during the Second World War. Nordhoff was appointed as managing director in January 1949. Over the next 20 years Nordhoff turned Volkswagen into one of the world's leading car manufacturers.

Icon of the Economic Miracle

In 1949, Major Hirst left the company—now re-formed as a trust controlled by the West German government and government of the State of Lower Saxony. The "Beetle" sedan or "peoples' car" Volkswagen is the Type 1. Apart from the introduction of the Volkswagen Type 2 commercial vehicle (van, pick-up, and camper), and a sports car, Nordhoff pursued the one-model policy until shortly before his death in 1968.

In 1955, as production increases dramatically, sales of the Beetle reach one million. In 1964, Volkswagen buys Auto Union, owners of the historic Audi brand. Volkswagen becomes the symbol of the new German economic might. 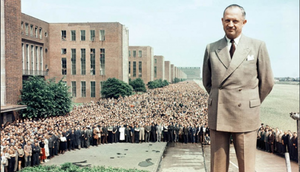 In 1960, the German federal government sells it stake in the company, but Lower Saxony kept its 20% share[citation needed]. Later, the company is indirectly majority owned by the Austrian Porsche and Piëch families.

The Volkswagen Group worked closely with the CIA-backed military dictatorship in Brazil, which held power in from 1964 to 1985, and collaborated in the persecution, torture and murder of autoworkers.

The firm’s own plant security service at its facility in Sao Paulo operated like an intelligence service, spying on VW employees, preparing lists of political opponents which ended up in the hands of the authorities, arresting militant workers and transferring them to the political police and enabling the arrest of workers by the military police on the grounds of the plant, thereby handing them over to be tortured. The company’s chief executive was informed of the arrests as early as 1979.[5]

A Brazilian investigation stated that "first, the company actively participated in the arrest of VW employees. Second, it harassed and dismissed oppositionist workers. Third, it aided and abetted the government in torture. Fourth, VW officials financially supported the Operação Bandeirante (OBAN) torture centre and the DOI-CODI (Departamento de Operações de Informações-Centro de Operações de Defesa Interna). Fifth, VW is guilty of conspiracy and participation in the military coup of 1964 and the two decades of military rule that followed."

The investigation concluded that “VW had an active role. It was not forced. The company took part because it wanted it that way.”[6]