From Wikispooks
< Weapon
Jump to navigation Jump to search

Weapons testing means the testing of a new developed or improved weapon system on the battlefield. Some of the testing may be done by the laboratory or manufacturer, but in general, everything that is meant to be used in a theater of war needs to be probed, tested and checked under real life circumstances. Technologies that still are not openly acknowledged to exist, have been recognized by civilians or military personnel in foreign countries.

Theodore Shackley in his book: The Third Option describes a situation in which the agency retained a minimal capacity for covert action after budget cuts from the Carter administration and could (still) provide:

Testimony from the United States invasion of Panama, codenamed Operation Just Cause, between mid-December 1989 and late January 1990.

We have testimony about combatants who died literally melted with their guns as the result of a laser. We know of automobiles that were cut in half by these lasers. Of atrocities committed by weapons that fire poison darts which produce massive bleeding.

What follows are accounts of people who were in the warzone during the american attack. Excerpted from: "This is the just cause - breaking the silence : testimony of the Panamanian people, resulting from the U.S.A. invasion"[3][4]

W3 - [...] There where two helicopters attacking. We could see what looked like red rays being fired from the helicopters. This went on for about ten minutes. (the conversation goes on to explain that there were no military targets but houses of military officials) [...] they were fired straight from the helicopter at their target - like something from Star Wars, like they were laser rays. ... They were like red lights and made a sound ’wiin’ ’wiin’ and 'rree' 'rree', and then 'pum', hitting their target ... We were like one kilometer away, and we could see the rays and feel the heat from here.

M1 - [...] they arrived with a weapon that shot 'laser-rays', using implosive bombs as well as explosive ... the technological difference was total and absolute. 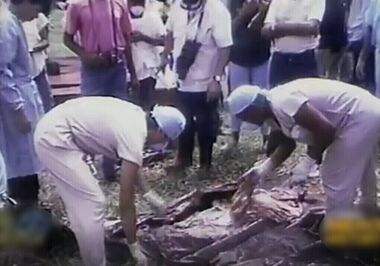 The Panama Deception:[5][6] Not exactly clear from the picture, but in the video, these people handle human remains that one could think were rotting for weeks. If that were so, it would hardly be possible for the other people around to stand so close without respiratory protection from the smell; while it is not explicitly mentioned in the documentary at that point, it is likely the kind of injury that was caused by the chemical substances described in the other testimony.

[...] we heard comments being made by people*, that some people had been killed and their bodies burned, but that they had nut burned in fires, but rather they had been burned by some chemical substance [...] They say that the bodies were completely unrecognizable.

Yes, they used bullets that exploded inside and caused many, many injuries.

Medical personnel stated that the US army used new weaponry. It caught their attention a certain wound caused by a bullet or explosive that splintered much of the body, producing extensive bleeding. They stated that they didn't know how to deal with these wounds and that these wounded persons did from bleeding.

Laser weapons ("laser-beam weapons of war") are also mentioned in REPORT No. 121/18 of the Inter-American Commission on Human Rights from October 2018 [7]and other accounts from the region at the time.[8]

The testing of weaponry that started in Panama was continued in the 2003 Iraq war[9][10] (see documentary Guerre stellari in Iraq). Saifeddin Fulayh Hassan Taha al-Rawi told Al Jazeera that US forces used neutron and phosphorus bombs during their assault on Baghdad airport before the April 9 capture of the Iraqi capital.

"The enemy used neutron and phosphorus weapons against Baghdad airport... there were bodies burnt to their bones,"

The bombs annihilated soldiers but left the buildings and infrastructure at the airport intact.[11]

It is possible that the Haarp project was not what it appeared to be on the outside and had other undeclared capabilities.

Weather modification is going on for decades, some of these projects on the US side were declassified.