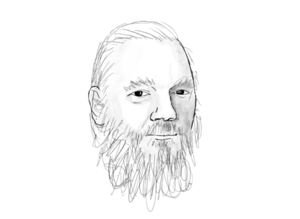 Health problems have worsened in Belmarsh

★ Start a Discussion about this document
The Unrelenting State

We are seriously worried about the condition of Julian Assange. He was too unwell to appear in court yesterday, and his Swedish lawyer, Per Samuelson, found him in a state where he was unable to conduct a conversation and give instructions. There are very definite physical symptoms, particularly rapid weight loss, and we are not satisfied that genuine and sufficient diagnostic efforts are being made to determine the underlying cause.

Julian had been held for the last year in poor, highly confining and increasingly oppressive conditions in the Ecuadorean Embassy and his health was already deteriorating alarmingly before his expulsion and arrest. A number of conditions, including dental abcesses, can have very serious consequences if long term untreated, and the continual refusal by the British government and latterly the Ecuadoreans to permit him access to adequate healthcare while a political asylee was a callous denial of basic human rights.

I confess to feeling an amount of personal relief after his arrest that at least he would now get proper medical treatment. However there now seems to be no intention to provide that and indeed since he has been in Belmarsh Prison his health problems have accelerated. I witnessed enough of the British state’s complicity in torture to know that this may be more than just the consequence of unintended neglect. That the most lucid man I know is now not capable of having a rational conversation is extremely alarming.

There is no rational reason that Assange needs to be kept in a high security facility for terrorists and violent offenders. We are seeing the motive behind his unprecedented lengthy imprisonment for jumping police bail when he entered political asylum. As a convicted prisoner, Assange can be kept in a worse regime than if he were merely on remand for his extradition proceedings. In particular, his access to his lawyers is extremely restricted and for a man facing major legal proceedings in the UK, USA and Sweden it is impossible, even were he healthy, for his lawyers to have sufficient time with him adequately to prepare his cases while he is under the restrictions placed on a convict. Of course we know from the fact that, within three hours of being dragged from the Ecuadorean Embassy, he was already convicted and sentenced to a lengthy prison term, that the state has no intention that his lawyers should be able to prepare.

I have asked before and I ask again. If this were a dissident publisher in Russia, what would the UK political and media class be saying about his being dragged out by armed police, and convicted and sentenced to jail by a judge without a jury, just three hours later, after a farce of a “trial” in which the judge (Michael Snow) insulted him and called him a “narcissist” before he had said anything in his defence? The Western media would be up in arms if that happened in Russia. Here, they cheer it on.

Below is a photo of Julian in the Embassy in happier times, during the Correa Presidency, with a truly amazing and strong group of people, every one of whose stories we can follow and learn from: 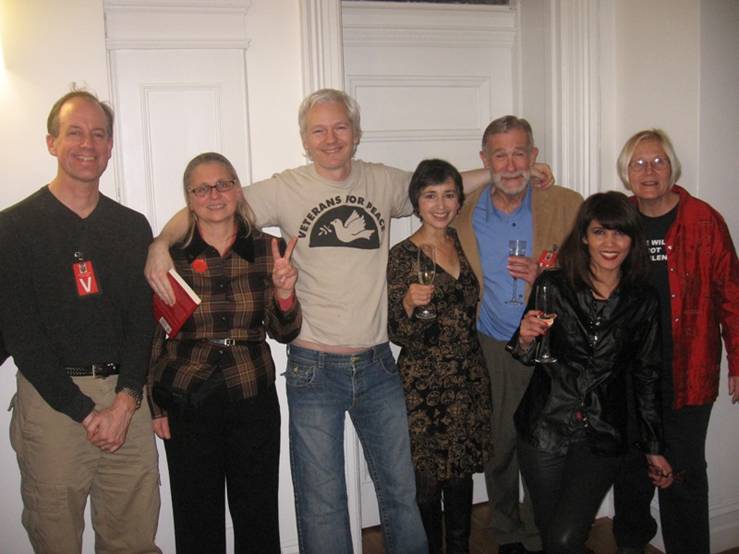 I should add that I am currently trying to see Julian personally with two other close friends, but obviously access is extremely difficult.

Julian’s personal possessions have been seized by the Ecuadoreans to be given to the US government. These include not only computers but his legal and medical papers. This is yet another example of completely illegal state action against him. Furthermore, any transfer must involve the stolen material physically transiting London, and the British government is taking no steps to prevent that, which is yet another of multiple signs of the degree of international governmental coordination behind the flimsy pretence of independent judicial action.

Julian is imprisoned for at least another five months, even with parole (which they will probably find an excuse not to grant). After that he will be held further on remand. There is therefore no need for rush. The refusal of the Swedish court to delay a hearing on a potential extradition warrant at all, to allow Julian to recover to the extent he can instruct his lawyer, and the very brief postponement of the US extradition hearing in London, with the intimation it may be held inside Belmarsh Prison if Julian is too unwell to move, are both examples of an entirely unaccustomed and unnecessary haste with which the case is being rushed forward. The mills of God grind slowly; those of the Devil seem to spin dangerously fast.

Finally, for those who still believe that actions against Julian, particularly but not only in Sweden, are in any way motivated by a concern for justice, particularly justice for violated women, I do urge you to read this excellent account by Jonathan Cook.[1] As a summary of the truly breathtaking series of legal abuses by states against Assange, that the corporate and state media has been deliberately distorting and hiding for a decade, it cannot be bettered.