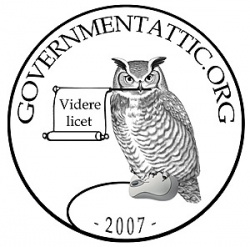 The Freedom of Information Act (FOIA), 5 U.S.C. § 552, is a federal freedom of information law that allowed for the full or partial disclosure of previously unreleased information and documents controlled by the United States government. The act is still in force, and FOIA requests are still filed and responded to in US and in other countries where similar legislation exists. The US government itself does not provide easy access to these documents, but thousands of FOIA acquired documents are available at GovernmentAttic.org/.

The Freedom of Information Act was initially introduced as the bill S. 1160 in the 89th Congress. When the two-page bill was signed into law it became Pub.L. 89–487, 80 Stat. 250, enacted July 4, 1966, but had an effective date of one year after the date of enactment, or July 4, 1967. During the period between the enactment of the act and its effective date, Title 5 of the United States Code was enacted into positive law.[1] For reasons Wikipedia describes as "now unclear but which may have had to do with the way the enactment of Title 5 changed how the law being amended was supposed to be cited", the original Freedom of Information Act was replaced. A new act in Pub.L. 90–23, 81 Stat. 54, enacted June 5, 1967 (originally H.R. 5357 in the 90th Congress), repealed the original and put in its place a substantively identical law. This statute was signed on June 5, 1967, and had the same effective date as the original statute: July 4, 1967. Ironically, it was Lyndon Johnson who signed the act into law, in spite of misgivings.

In 2014, the NSA released documents it had obtained from the CIA by using FOIA requests.[2] 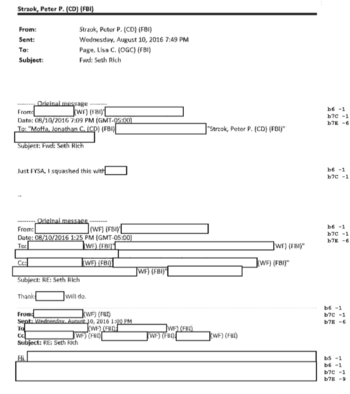 After September 11th, 2001, in the face of the routine censorship under the "war on terror" dogma, John Young reports increasing stonewalling by US government officials and these days almost no information of value is forthcoming. He said in 2013 that he makes only about 1 FOIA request per year and that he thinks that "the FOIA system should be closed as a money-wasting fraud." Agencies appear to be able o flat out lie with impunity, as for example the CIA did when asked about assassinations.[3]

The FBI denied having any records about Seth Rich, a claim belied by a response to a FOIA request for emails between the FBI Head of Counterterrorism Peter Strzok and FBI attorney Lisa Page.

The FBI, an agency "considered notoriously opaque by Freedom of Information Act (FOIA) experts" in 2017, took steps to further reduce transparency, by declaring that it would no longer be accepting FOIA requests by email..[4] 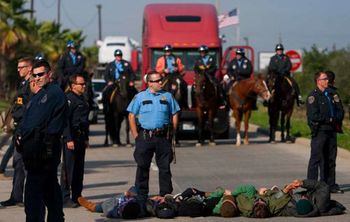 A rare post 9-11 success for a FOIA request was the partial exposure of the Dallas occupy plot. A request by Jason Leopold to the FBI and DOHS turned up documents which were used by Ryan Shapiro, an MIT graduate student, to filed several more specific FOIA requests in 2013. In response, the FBI said they had no relevant records, so Shapiro sued, accusing the bureau of an inadequate search. The FBI then reported 17 pages of relevant records, and released 5 heavily-redacted pages, enough to deduce the existence of a plot to use snipers to assassinate leaders of the Dallas Occupy movement. Shapiro sued again, demanding access to all pages, and a federal judge ordered the FBI to explain why information was withheld. Notwithstanding an earlier denial of any engagement with law enforcement, the FBI then claimed that release of documents would interfere with ongoing law enforcement proceedings and/or privacy of law enforcement personnel. A judge approved these reasons for non disclosure in February 2015[5] 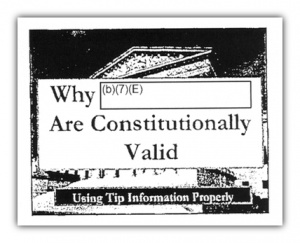 The DEA is even redacting the names of its programs...

The US DEA has more than doubled its rate of denials of FOIA requests under US President Barack Obama.[6] See the example on the right to grasp the kind of denials now routine in 2014; the DEA redacted the name of a method its trainers and legal auditors deemed not only constitutional but also palatable to the public. This shielded tactic is “tips and leads paradigm” that is the "primary methodology for protecting [intelligence community] information that is shared with [law enforcement agencies]." The DEA scrubbed all mention of this method throughout the entire document release by claiming FOIA exemption b(7)E, which protects law enforcement techniques from disclosure. Redactions extended even to a separate presentation devoted to the constitutionality of this method.[7]

In 2014 U.S. District Court Judge William Zloch questioned the FBI's failure to produce court documents requested under the Freedom of Information Act in the matter of 9/11, noting that the FBI had

"The city has turned over 3,700 pages of documents through the lawsuit. The NYPD initially said they couldn’t find records relevant to the Center’s request."[9]