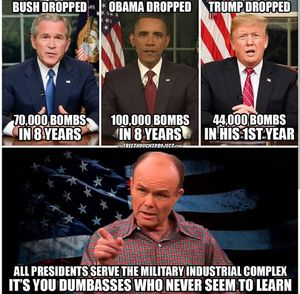 Mark Gorton notes that the US presidency has been under the more or less direct control of the same cabal who were responsible for the 1963 JFK Assassination ever since.[1]

So far, by the official documents 2 US Presidents have visited the Bilderberg at least once. Others are strongly suspected of visiting, including Hillary Clinton and Barack Obama.[citation needed]