The Research, Information and Communications Unit (RICU) is a strategic communications unit within the UK's Office for Security and Counter-Terrorism. Based in the Home Office it is also funded by and answerable to the Foreign Office and the Department for Communities and Local Government.[1] 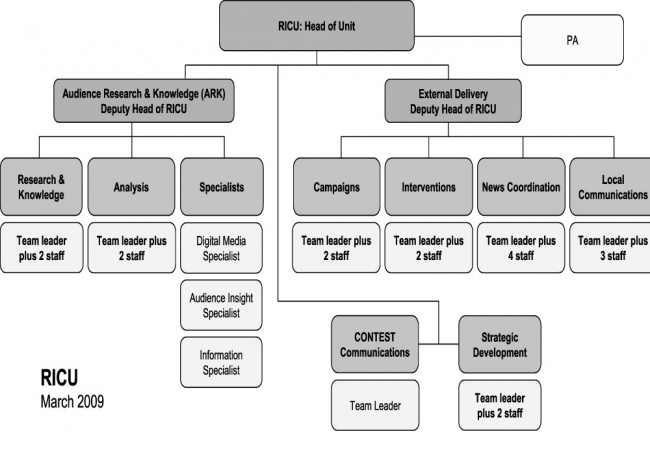 The Sunday Times reported in December 2007 that:

The alleged airline plot in August 2006 caused another of the government’s periodic rethinks. For all the work on pursuing terrorists, the government realised that its strategy on preventing more taking their place was not working. After a bureaucratic tussle, the Home Office has become the centre for a new strategic hub for all counterterrorism policy: the Office of Security and Counter Terrorism.

The rethink also led to the creation of the nebulously titled Research, Information and Communications Unit (RICU). Officials deny this is in any way a propaganda department, although one conceded: “It does sound horribly cold war.”

Its task is to analyse the way in which key audiences at home and abroad (in other words, Muslims) react to messages from the government and to try to give more coherence to those messages to undermine the ideology of Al-Qaeda. In the counterterrorist jargon of the day, its job is to build and promote a counter-narrative to the single narrative that Al-Qaeda and its allies propagate. “You can do it without it looking like government propaganda, because if it looks too much like government propaganda then I don’t think people are going to listen, nor should they,” argues Mottram.[3]

The RICU is part of the Home Office.[4]

According to the Home Office, the total numbers of staff in RICU was as follows:

Home Office figures on the cost of RICU are as follows.[6]

As of March 2009, the RICU consists of the Head of Unit and his Personal Assistant. The Head of Unit oversees two branches. Both of the branches has a Deputy Head and separate teams.[7]

All of the above information was provided by the Home Office.[8]

The RICU demands civil servants not to use phrases such as "Islamist extremism" and "jihadi-fundamentalist," purportedly due to the fact that the organization wishes to thwart any ideas of a fundamental connection between islamic beliefs and terrorism. Civil servants are required to refer to terrorism and terrorist groups as "violent extremism," "criminal murderers" and "thugs."

On June 24, 2008, Jonathan Allen (head of RICU) was featured at a panel discussion called "Words Matter: The Role of Lexicon in Counter-Terrorism Communications Strategy." The discussion was hosted by the Homeland Security Policy Institute. The other featured speakers were Daniel Sutherland (Officer for Civil Rights and Civil Liberties at the US Department of Homeland Security), and Jeffrey Imm, (research director for the Counterterrorism Blog and former analyst with the FBI).

On Tuesday, 7 October 2008 at 15:00, Jonathan Allen, Head of the RICU, spoke at a conference called "Public Diplomacy: Meeting New Challenges" held at Wilton Park in West Sussex. He spoke during a section of the conference called, "How to Change Public Behavior: A Foreign Policy Context." His fellow speakers during this section of the conference included Klavs Holm (Under Secretary, Ambassador, Ministry of Foreign Affairs, Copenhagen), and David Kenning (Chief Strategist, Bell Pottinger Sans Frontieres, London).

November 2008, Home Secretary Jacqui Smith met with Pakistan's Information and Broadcasting minister Sherry Rehman at the House of Commons to discuss bilateral issues and combating terrorism. Smith said that military force alone will not stamp out terrorism. Smith discussed the British counter-terrorism strategy, which is the RICU, with Rehman. Smith said that the RICU "...plans advances and amplifies the objectives in today's crowded mobile world." She then said that Rehman has Britain's support in creating and implementing a similar organization in Pakistan. Rehman discussed Pakistan's problem with terrorism using the assassination of Mohtarma Benazir Bhutto as an example.

According to the Home Office, the following are the projects that have been undertaken by the RICU since its formation:[9]

The RICU was created as a result of the advice of Dr. J. P. Macintosh, who is currently the head of the Advanced Research and Assessment Group (ARAG) for the Defence Academy of the United Kingdom. "He catalysed the use of a "war room" facility to begin building the capacity needed to transform the Home Office. His advice was "instrumental in the creation of the Office of Security and Counter Terrorism (OSCT) and the Research Information & Communication Unit (RICU)."[10]

Journalists in touch with RICU