The original WTC7 (World Trade Center 7) was a 47-storey reinforced steel building. It became a small heap of rubble in just 7 seconds at 5:20pm on September 11th, 2001. It was not until two months after WTC7's destruction on 9/11 that the presence of CIA offices in the building was revealed. In a New York Times article published on November 4th, 2001, James Risen wrote:

"The agency's New York station was behind the false front of another federal organization, which intelligence officials requested that The Times not identify. The station was, among other things, a base of operations to spy on and recruit foreign diplomats stationed at the United Nations, while debriefing selected American business executives and others willing to talk to the C.I.A. after returning from overseas."[1]

Opened in 1987, clad in red exterior masonry, the original WTC7 occupied a trapezoidal footprint. In 1988, Salomon Brothers signed a long-term lease, and became the main tenants of the building, but had trouble filling the building. In addition to the CIA, other federal agencies with offices in Building 7 were the Department of Defense, Internal Revenue Service, Secret Service, and Security and Exchange Commission. New York City's Mayor Rudy Giuliani had his Office of Emergency Management on the 23rd floor. 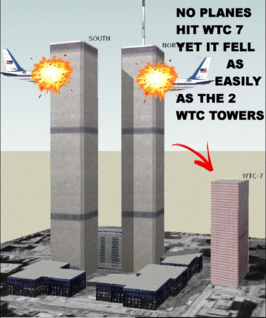 At 5:20pm on September 11, the tower collapsed into its own footprint in the space of 7 seconds after it burned for about 7 hours. Although no concrete skyscraper had ever collapsed due to fire before, no one is known to have been killed or injured by the event since firefighters had been told all afternoon that it was liable to collapse or demolition, as was New York Mayor, Rudy Giuliani[2]. Its destruction was announced as a " collapse" by CNN and BBC before it actually occureed.[3]

Media Blackout of the Destruction

The commercially-controlled media had very little to say about the destruction once it had happened, and nothing at all for years afterwards - until it became widely known in 2007 by those researching the events of 9/11 - until producing a number of 'hit pieces' to attempt to discredit those doubting the US government's official story.[4]