After some astonishing pre-announcements of the destruction of WTC7, commercially-controlled media were quick to omit all mention of it - quite a contrast with the endless repetition of images of planes flying into WTC 1 and 2 - often with a small inset image of Osama bin Laden in one corner. Only after videos of WTC7 (and in particular the premature announcements of its 'collapse' by the BBC and others) began to circulate widely on the internet was this absolute blackout policy moderated. 'Hit pieces' were produced to point out the absurdity of questioning the official narrative.

Media Coverage on the day itself

Commercially-controlled media quickly transitioned coverage of the building's destruction to a "feel good" spin, focusing on the building being vacant when it came down. Dan Rather and Peter Jennings were more candid with their immediate comments, relating it to the familiar demolition of buildings we all well know.

Transition to Building-7 Blackout in First Hours After Destruction

TV records for this review were gathered from the "Internet Archive" on line collection. [1]

DR: Dan Rather - "For the third time today, it's reminiscent of those pictures we've all seen too much... when a building was deliberately destroyed by well-placed dynamite to knock it down." Dan Rather coverage of Building 7's destruction is on YouTube.[2]

PJ: Peter Jennings - "Well, there’s Building 7 coming down. When you think that part of the component of news coverage around the country every year is the excitement, the fun, that people get watching an old building being demolished, and they wire it very carefully for days. It’s a very careful operation in order to make sure a building comes down safely. I think the last one we saw was when they brought down one of the old casinos in Las Vegas. It’s just stunning to see these buildings come down...and now, number seven World Trade Center which is 47-stories tall."

AB2 & MM: Aaron Brown & Maureen Madden - "The whole south side of the building was engulfed in flames, at one time. They had been waiting for it to come down for the past half hour or so. At least they had some warning."

DS: Diane Sawyer – "As you know, within the hour, another building came down, a 47-story building."

AB1: Ashleigh Banfield – "Those people (Bldg 7) had all been cleared out of those buildings as soon as the first plane it the WTC this morning. They were just waiting for that building to go down."

PH: Philip Hayton - Shows video of the destruction. "Supposedly has been weakened because it was so close to the other buildings. Presumably, they were able to evacuate everyone."

ML & TN: Mike Landess & Tracey Neale – Shows Video of destruction. Landess says, "The information we have this building was probably incredibly structurally damaged by the goings on right next door." Neale follows, "It is another building at the World Trade Center itself, number seven, World Trade Center. It had been evacuated this morning. So, structural damage probably led to this building coming down."

SP: Scott Pelley – "Thru the day, an inferno raged in Building 7, another massive office tower. Fire fighters feared it would collapse. And, a little more than 8 hours after the attack, the abandoned building fell."

DS-Int.: Diane Sawyer interviewed a volunteer from California (J.D. Halperim) reporting from near the destruction of WTC7. "Well, at Building Seven, there was no fire there, whatsoever. There was one truck putting water on the building. But then, it collapsed completely. (The context implied the observation of no fire was after the collapse.) 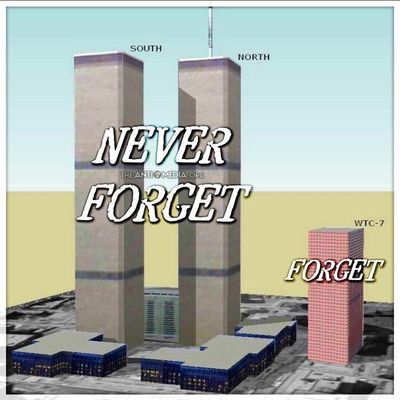 The absolute blackout of WTC7 from commercially-controlled media lasted for years and was generally effective in that most viewers who saw the building destroyed either attached no special importance to it or forgot about it entirely. Its effectiveness can be gauged from the audacious decision to completely omit mention of WTC7 from the report of the 9-11 Commission. The chair, Lee Hamilton claimed not to recall whether a specific decision was made to leave it out.[3] Only after the initial shock of the event was replaced by a sober reflection about the impossibility of the official narrative did WTC7 arise as the centerpiece of the arguments for a re-investigation.

In 2007, after videos of the destruction began to circulate widely - and the premature announcement by CNN/BBC in particular - it was felt that some response was needed to try to quell the realisation that a blackout was ongoing.

In February 2007, in response to considerable external pressure over the report and video , Richard Porter, one of the BBC's senior editors posted two separate blog articles endeavouring to explain how it was that the BBC had reported the collapse of one of the tallest buildings in New York half an hour before it was destroyed. The posts followed the broadcast of the 9/11 episode of their feature series Conspiracy Files and talk of "conspiracy theory". As of July 2011 these blog posts are still on the BBC web site.[4] and [5] . They have also been archived on Wikispooks. His blog contains the following

"We didn't get told in advance that buildings were going to fall down... We no longer have the original tapes of our 9/11 coverage (for reasons of cock-up, not conspiracy). ... If we reported the building had collapsed before it had done so, it would have been an error - no more than that. [6]"

No further statement was issued and no reply given to any of the 597 comments made.

Since 2007 various hit pieces have been made about the destruction of WTC7.

No serious attempt is made to answer the questions raised or to provide a complete account of what happened. Some have argued that these hit pieces are counterproductive - that their failure to address the issues may have encouraged more skepticism of the official narrative than it quelled.[8] They do, however, prevent claims that the topic has been completely censored.

The 9/11 anniversary specials shown on commercially-controlled media have gradually scaled-back their "uncut" footage of the day's events. They start out promptly at 8:46 am, but end (for example, on 2012-11-09[citation needed]) around 2:00 pm. So the WTC7 footage is completely skipped as if it were non-existent.

The first indications of a change in direction were visible in coverage in UK. On June 22, 2016, the Daily Express headlined a story "Were 9/11 towers blown up by bombs? University probes if planes REALLY were responsible", which centered on the University of Alaska's sponsoring "a full investigation into claims that World Trade Center Building 7 was brought down by a controlled demolition during the 9/11 attacks".[9] On September 10th, 2016, John Austin published a second article entitled "Was 9/11 an inside job? Call for TRUTH over Building 7 collapse on eve of 15th anniversary" which conceded that "growing numbers of people STILL claim the Twin Towers atrocities could have been an inside job."[10]

Brian Michael Jenkins and Frances Edwards-Winslow did not mention building 7 in their report Saving City Lifelines: Lessons Learned in the 9-11 Terrorist Attacks.[11] 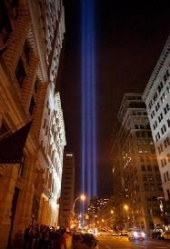 Citizens continue to try to counter the blackout by the commercially-controlled media.

As a surprise for the 9th anniversary, AE911Truth put up a third light beam at the World Trade Center representing the truth about the controlled demolition of Building 7, but a media blackout quickly suppressed TV coverage. The other two official beams represented a memorial to the lives lost in the Twin Towers.

The third beam was turned on at precisely 9:11 p.m. on September 11, 2010. At that same instant, a press release from AE911Truth through PRNewswire service was sent to the full list of media outlets in the NYC Metro area. Shortly thereafter, a number of people called stations asking them about the third beam. Generally, the explanation given was that it stood for Building 7. PRNewswire reported the third-beam press release received the second "most read" designation on their website for that day. Despite this, the commercially-controlled media made no mention of any third beam.

Remember Building 7 began in late 2010, raising $100,000 in small donations to purchase commercial time on cable television throughout the New York Metropolitan Area. The first TV ad, which featured four 9/11 family members, ran 580 times from Novmber 2 through December 5, reaching an estimated one million unique viewers an average of 8 times each. They continue to broadcast TV ads and purchase billboards to disseminate the truth about WTC7. The group changed their name from BuildingWhat? with the release of the second ad in March 2011. Their website is RememberBuilding7.org.

Tony Rooke refused to pay a TV license fee to the BBC, citing section 15 of the UK Terrorism Act 2000:


(3) A person commits an offence if he —
(a) provides money or other property, and


(b) knows or has reasonable cause to suspect that it will or may be used for the purposes of "terrorism".

Since the BBC had intentionally misrepresented facts about the 9/11 attacks, he argued, he would be liable to prosecution under this act if he paid his TV licence, and was not paying his license fee since opaying it would to be committ a greater crime. He compiled a large dossier of evidence on media complicity, noting that the BBC reported the 'collapse' of World Trade Center Building 7 over 20 minutes before it occurred.[14] Rooke was not allowed to show his pre-prepared video evidence in court because the District Judge said it was not relevant to the trial. He was not required to pay his TV licence, but was required to pay £200 costs.