The 2007 Yucatan Gulfstream drug crash took place on 24 September, when a CIA connected US-registered Gulfstream II (tailnumber N987SA) crashed in the Mexican jungle. Daniel Hopsicker dubbed it "Cocaine 2"[1] since the plane had tons of cocaine on board, and crashed the year after another CIA plane drug bust that he had dubbed "Cocaine 1". All four crew members survived the crash[2] but were too heavily injured to flee.

A Gulfstream II business jet crashed in the Yucatan, Mexico, with somewhere between 3 and 6.3 tonnes of cocaine on board. Although the plane had formerly used by the CIA for "extraordinary rendition" to Guantanamo Bay, FAA records show that it had been sold multiple times since, and it was owned by Joaquin "El Chapo" Guzman's Sinaloa Cartel when it crashed. Documents show[Which?] that the CIA no longer owned the plane when it crashed, so this is a chance occurrence which provides no evidence that the CIA is involved in drug smuggling. Wikipedia used to mention this crash, but never gave it its own page, and all references to it were removed in October 2016 with the claim that "The McClatchy article should be good, yet it cites Daniel Hopsicker's website for its information." (The internet archive's recording of that page as of 13 October 2007 does not mention Hopsicker's name).[3]

Wikipedia used to mention this crash on its page about aircraft used for rendition, but this was deleted in October 2016.[4] It stated that "The aircraft departed Fort Lauderdale Executive Airport in Florida, USA, on September 18 for Cancun, Mexico, then flew on to Colombia to pick up the load of cocaine from the FARC rebel group before returning to Mexico. Bribes paid to local civil aviation officials in Cancun were supposed to allow the aircraft and its cargo to avoid customs on arrival, but only minutes from landing, Bermúdez personally phoned co-pilot Muñoz and demanded the crew divert to Manzanillo, over 1500 km to the west, on Mexico's Pacific coast. The flight had been tracked by the Mexican Air Force since it entered Mexican airspace and a heavy military presence was waiting for them on the ground at Cancun. When the Gulfstream deviated from its approach to Cancun, Mexican Air Force aircraft which had been shadowing it moved in to intercept. Trapped, the Gulfstream crew put their aircraft into orbit over the town of Tixkobob near Mérida in northwestern Yucatan for almost two hours before finally crash-landing in the jungle." 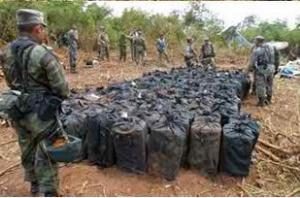 On September 24, 2007, just before dawn[1], a US registered Gulfstream II, N987SA , c/n 172, crashed in the Yucatan, Mexico, carrying at least 3 tons of cocaine. Daniel Hopsicker reports 4 tonnes,[1] but one source suggesting as many as 6 tonnes.[5][6] One source suggested that the flight was "being chased by Mexican military helicopters for flying illegally into Mexican airspace".[7]

The pilot was Edik Muñoz Sanchez[8] and the co-pilot was Omar Alfredo "el Piolo" Jácome del Valle.[9] Mexican soldiers reached the crash site the next day and arrested them both since they were too badly injured to flee. They also recovered 132 "military-style"[10] bags containing cocaine.[11][12] 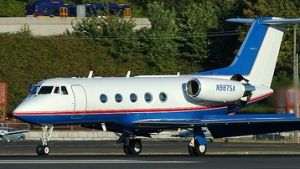 Similarly to Cocaine 1, another plane found in Mexico to be carrying tonnes of the drug, the plane changed hands multiple times before being used to smuggle cocaine to the US from South America. It also had interlocking owners and shared a base in St. Petersburg, Florida.[1] The paper trail suggests that after being owned by Air Rutter International for nearly a decade, it changed hands at two or three times in the weeks leading up to the crash.[13][14] At the time of the crash, the business jet was registered to Donna Blue Aircraft Inc, which had acquired it using money from the trust of the company Powell Aircraft.

The same aircraft, under tail number N987SA, was used to deliver prisoners to Guantanamo Bay. Logs show that it flew to Guantanamo Bay from Washington, D.C. twice and from Oxford, Connecticut once. Wikipedia suggests that "is likely that the purpose of these flights was to ferry CIA and Pentagon interrogators to Guantanamo to question detainees". On April 16, 2005 it was sighted in Arkansas.[15]

William Cripe, who runs Air Rutter International (later JetFlite International) in Long Beach, California said he leased the plane for a year until it was sold, using it in his charter service. He said the plane didn't fly to Cuba or to the Caribbean while his company operated it.[13]

On August 30, 2006, it was sold by New York real estate developer and thoroughbred horse owner William Achenbaum to Donna Blue Aircraft, a Florida-based front company owned by two Brazilians, Joao Luiz Malago and Eduardo Dias Guimaraes. [13] Their website contained numerous typos, used "John Doe" as if it were an ordinary American name, and was summarised by Daniel Hopsicker as "such a clumsy half-hearted effort that it defeats the purpose of helping aid the construction of a plausible 'legend', or cover, and ends up doing more harm than good..."[14][16]

A bill of sale was reportedly produced stating that on September 16, 2006, it was sold on to two Americans, Clyde O'Connor and Greg Smith for $2 million, though the FAA stated that they had not received the change of ownership paperwork.[13] Over the next two days, money from the Americans trust company Powell Aircraft Title was used to acquire the aircraft for the drug trafficker Pedro Antonio "The Architect" Bermúdez Suaza.[9]

A week later, the head of the Directorate General of Civil Aviation (DGAC) in Cancun was found shot dead after being kidnapped from a soccer match. He had reportedly refused the cocaine-carrying Gulfstream permission to land at Cancun.[5][17]

A Wikipedia page about this was created on 31 October 2007. On November 5 this was removed and merged into their page on "Rendition aircraft". Mention remained about "N987SA" for some years, but was deleted in 2016; by 2019 although he redirect remained, that page had no reference to the plane.[4]

The story was published by Daniel Hopsicker who published a retrospective in 2013, explaining about money laundering.[18]

19 August 2016 Robin  A CIA rendition plane with tons of cocaine crashes in Mexico.