Cocaine or 'coke' is an alkaloid extracted from the leaves of the coca plant. It generates short lived euphoria and energy, and is a widely used recreational drug. Since the 1961 Single Convention on Narcotic Drugs, it has been illegal worldwide. Its worldwide use has increased dramatically over this time. Control of the export trade from South America is a source of strife between deep state factions, but has been generally dominated by the CIA/Drug trafficking since the 1980s if not before.

The method of manufacturing cocaine from the coca leaf was invented in the 1860s.[1]

The world's cocaine is produced from coca grown in the Andes in South America. Plan Colombia was officially intended to decrease cocaine production and export to the US. On its announcement, Peter Dale Scott predicted that increased involvement of the US military would have an entirely converse effect. His prediction, that the amount of cocaine produced and exported would increase, proved correct. So much evidence has accumulated that the CIA's name has become synonymous with cocaine trafficking to USA.[2]

Cocaine was legal in the USA until the 1914 Harrison Tax Act, and was an ingredient in the soft drink Coca-Cola.[1]

In 2017 in USA, a man was arrested after a dog determined that his cash smelt of cocaine. No traces of the drug were found.[3] 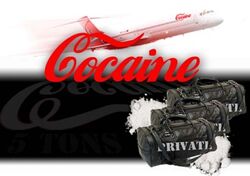 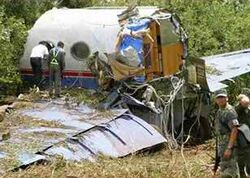 Remains of the plane referred to as "Cocaine 2"

Gary Webb was the first journalist to expose CIA cocaine trafficking with a tranche of documents implicating the agency, the series he published as Dark Alliance. Further evidence that the US Deep state dominates the importation of cocaine into the North American continent is to be found from such events as the 2006 Mexico DC-9 drug bust and the 2007 Yucatan Gulfstream drug crash. The misleadingly-named Iran-Contra scandal may have been a limited hangout designed to try to unseat Ronald Reagan while hiding the cocaine trafficking by the CIA.

After the CIA installed Augusto Pinochet in Chile, he used his position to facilitate large scale cocaine production and export to US and Europe by the 1980s.[4]

In 2003, Willem Matser, a Dutch spook and "key advisor" to NATO Secretary General was arrested on charges of forgery, fraud and money laundering. His co-accused included Pietro Fedino, an Italian "crime boss"[5][6] with a previous conviction for cocaine dealing.[7] Fedino was "suspected of having conducted business over many years with the Cali cartel".[8] They were found innocent of conspiracy and money laundering, but found guilty of fraud and forgery in January 2004.

In 2019 according to data by the European Monitoring Centre for Drugs and Drug Addiction (EMCDDA), Belgium saw more cocaine trafficked than any other European nation, just over 65 tonnes.[9] 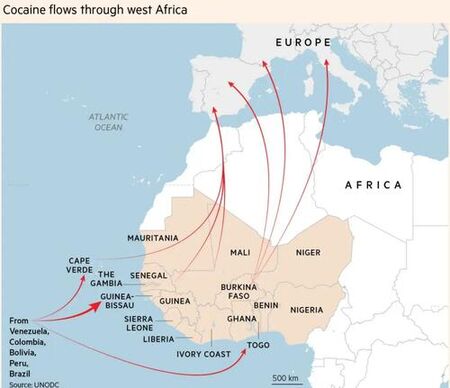 Andrei Fursov stated in 2014 that "Cocaine is transferred to Sierra Leone, where it is exchanged for diamonds. With the diamonds they purchase arms. This triangle - Hezbollah, Syria, Iran - gets in the way of the Americans. They take the view, correctly, that eliminating Syria as an Arab partner of Iran, whether relations with Iran are good or bad, Iran will be weaker, and it will be easier to get an agreement with them. The removal of the Assad regime therefore became objective No.1 for the Americans. Likewise for Saudi Arabia and Israel."[10]

The largest maritime seizure of cocaine in the Atlantic Ocean since 1999 was a 2017 seizure of approximately 4.2 tons of seized cocaine, worth an estimated $125 million in wholesale value.[11]

In 2009 the UK Home Office reported that cocaine was now being sold for as little as £20 a gram in some parts of the country,the lowest it had ever been.[18] 2019 research into cocaine residues in water suggested use in the UK had doubled since 2012. The National Crime Agency reported "evidence of a resilient supply chain" to the UK and noted that "multi-tonne shipments [of cocaine] to the UK have become increasingly common".[19] 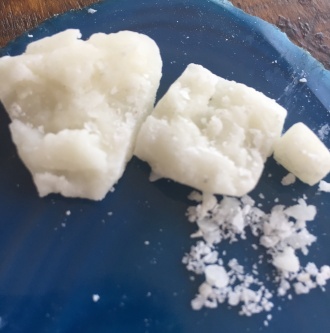 Cocaine powder is easily "cooked" up to a crystalline form, "crack cocaine", which as it is smokable, is reckoned to be more addictive. This form has been available in USA since late 1984. The 1986 Anti-Drug Abuse Act dramatically increased sentences for this form (a 100:1 disparity, meaning 5g of crack was treated in law as 500g of cocaine powder).[20] This resulted in much longer sentences for drug dealers in the (predominantly, poor, urban) neighbourhoods where crack was sold, and contributed to the racial imbalance among the prison population. The 2010 Fair Sentencing Act modified this imbalance down to 18:1, but was not applied retrospectively.[21]

A Cocaine victim on Wikispooks