In 2009 Tom Brake MP charged that he believed that the Metropolitan police were using at least two agents provocateurs at a G-20 demonstration in London.[1]

In 2007, Dave Coles, president of the Communications Energy and Paperworkers Union was attending a peaceful protest. He detected three suspicious 'protesters' wearing bandanas, one of whom was carrying a rock. He charged them with being agent provocateurs, and a highly compelling video of this event was posted to YouTube. The video showed that the men were wearing the same boots as the regular police officers. After initially denying the charges, the police eventually admitted that those charged were in fact undercover Quebec police officers.[2][3] 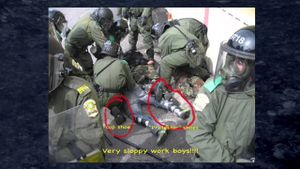