Police are public servants who exist to impartially carry out the law, for the benefit of all of society. They exist to prevent crimes and quell violence.

Police are arguably a relatively new invention, and have from their inception been focused on protecting the property and privileges of the rich (as might be expected from that fact that laws tend to have the same bias). The name "Police Force" yields insight into the assumptions behind the concept. As David Graeber summarises it: "Police are bureaucrats with weapons."[1]

“If you think about it, this is a really ingenious trick. Because when most of us think about police, we do not think of them as enforcing regulations. We think of them as fighting crime, and when think of “crime,” the kind of crime have in our minds is violent crime. Even though, in fact, what police mostly do is exactly the opposite: they bring the threat of force to bear on situations that would otherwise have nothing to do with it... most violent crime does not end up involving the police... Why are we so confused about what police really do? The obvious reason is that in the popular culture of the last fifty years or so, police have become almost obsessive objects of imaginative identification in popular culture. It has come to the point that it’s not at all unusual for a citizen in a contemporary industrialized democracy to spend several hours a day reading books, watching movies, or viewing TV shows that invite them to look at the world from a police point of view, and to vicariously participate in their exploits. And these imaginary police do, indeed, spend almost all of their time fighting violent crime, or dealing with its consequences.”
David Graeber [1] 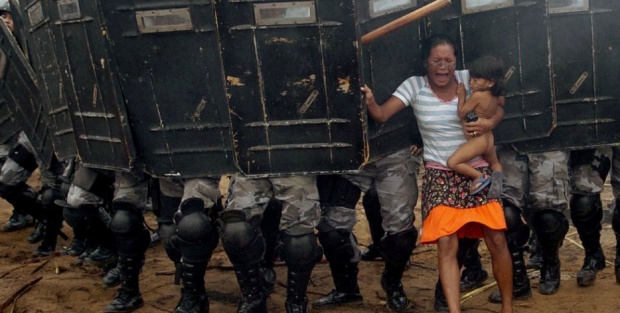 The apparent indifference of the US Justice Department to the rampant violence of some police in the USA[2] have lead to allegations that the US is a Police state. The UK Police is relatively much more restrained, though they are not without corruption and appear to be following the US model of yielding to the influence of big money, and have been co-opted by those peddling the "war on terror".

More and more nation states - including "democracies" - are moving towards de facto police state status in countless ways, while maintaining the trappings of civil society and party politics. The imagery and language of government is steadily being changed from administration to authority - from public servants to overlords, even potentially armed and dangerous ones. The "war on terror" is a major means of achieving this transformation, though the actual militarization is accompanied by a change in language and attitudes from concensus to autocracy. Children are prepared for life in a police state by being coralled in schools which increasingly are modeled on prisons. Unaccountable mass surveillance increases unchecked. In the UK in 2016, a council announced that "bin police" would check that people were following recycling regulations.[3]

Increasingly, people are questioning the official narrative of police as public servants, and are reinterpreting them as corporate enforcers. UK taxpayers may well wonder what to make of the fact that that the Association of Chief Police Officers, although funded by government money, was a private company. The revolving door between large corporations and governments does not inspire confidence. The concerns have only become more acute with the militarization of civil society under "war on terror" pretext.

The case of Ian Puddick is illustrative about just how easily supposed public police can end up under the control of corporate interests, and the ease with which the City of London Police got the BBC's reporting amended shows how simple it is for corporate bodies to find common cause against the interests of individuals.