Bernard Burrows was a UK diplomat who has been described as "a model of discretion" and as "a pillar of the British diplomatic establishment, at the centre of successive crises, including spy scandals."[1] His obituary observed that he "enjoyed an eventful diplomatic career and 30 years of scarcely less active retirement."[2]

Bernard's father was born in 1851 and died before Bernard's birth. He was brought up by his mother, Ione (nee Macdonald).[2] In 1934, after two years spent learning languages in France, Austria and Italy, he entered the Foreign Service.

Bernard Burrows served in Cairo throughout the Second World War and in Washington at the same time as Guy Burgess and Kim Philby.[2]

He became Political Resident in the Persian Gulf, based in Bahrain, in 1953, handling relations with Kuwait, Bahrain, Qatar and the seven Trucial States. Burrows expressed his disagreement with British foreign policy over Suez.

‘There is quite a lot to be said for a reasonably efficient feudalism’, Britain’s political resident in the Gulf, Sir Bernard Burrows, had commented a few months before the uprising, referring to the Gulf generally where Britain supported similar regimes. Burrows also noted three days after the British decision to intervene that there had been: ‘a noticeable swing of general opinion throughout the Sultanate in favour of Talib, who is becoming more and more recognised as the local exponent of Arabism, and against the Sultan, whose popularity is at a very low ebb now’.

Burrows was also aware that ‘it was fear of the British that kept’ the tribes in the Sultanate on the Sultan’s side ‘and only the thought that we were coming back which kept them from joining the rebels now’. Thus Britain ruled the country with terror and force in the name of the Sultan.[3]

In 1965, he was described in Anthony Sampson's Anatomy Of Britain as "one of the five most powerful people in Whitehall". 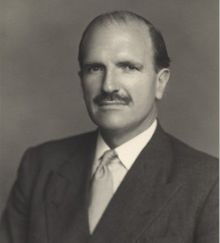