Cristina Martín Jiménez is a researcher and author who has written several books about the Bilderberg group.[1]

In 2010 she wrote: "The Bilderberg Club. The reality about the masters of the world", in which she lays out how the democratic system and planetary institutions really work. She details how the alleged influenza A pandemic and the attribution of global warming to human action "are the latest lies fabricated by the Bilderbergs to keep the population frightened and controlled". The book suddenly disappeared from the market. It was republished at the end of 2015 in Uruguay under the name: "The masters of the world on the prowl", which also includes specific chapters on the influence of Bilderberg in Uruguay. On her website she writes about the book: 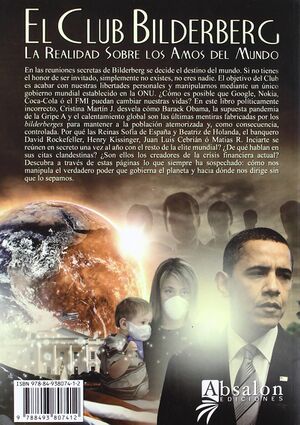 "Five and a half years have passed since the first publication of this book in May 2010, a month before the Bilderberg meeting in Barcelona. Being my third work and coinciding with the celebration of the controversial conclave in Spain, the book raised an unusual expectation. It is therefore surprising that it was only in bookstores for a brief period of time, despite the interest it generated. People who wanted to read it could not find it anywhere and denounced its disappearance in the networks. It had vanished leaving a trail of questions, uncertainties and silences. It was never explained to me what happened, I only know that a writer suffers when her work is censored. Perhaps you can imagine that today my happiness transcends the words that come out of my mind to express the joy I feel because I am coming back to life. It is the return of the prodigal son in book version.

What those who participated in his disappearance have achieved is to endow it with more value, because the denunciations and information that I predicted in this work in 2010 have become a reality, they are palpable, it is the world they find today when they turn on their televisions. But there is still more, because five years later the journalists who should be informing you do not tell you what is happening or who are the generators of the events that occur. There is less and less information and more and more infoxication. There is less and less freedom, which is why it is important for you to know the story contained in these pages. They are the pages of a book that has remained hidden until the slow, brave and wise time has come to rescue it." (Cristina Martín Jiménez, November 13th, 2015)[2]

In 2015 she published: "The Bilderberg Club's Plans for Spain" where she draws on declassified documents from the NSA and the CIA to recount the influence of the Bilderberg Club, and some of its most prominent representatives such as Henry Kissinger or Giscard d'Estaing, in the geopolitical situation of Spain since the Franco era.[3]

In 2016 she presented the first thesis worldwide on the Bilderberg Club at the University of Seville,[4] obtaining the qualification of outstanding cumlaude. 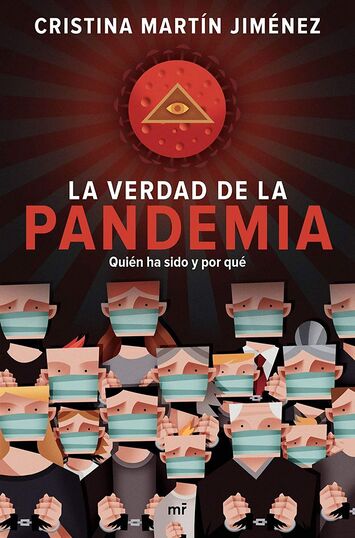 The cover of the latest book.

This page imported content from Fandom on 06 June 2021.
Fandom is not affiliated with Wikispooks.   Original page source here