The Bilderberg was a series of annual meetings which began in 1954, which quickly became an international deep state milieu of major importance. The last meeting held was in 2019.[1]

Why was the Bilderberg Hotel, Oosterbeek, the exact site of a 5-day-long massacre of isolated and ill-equipped British airborne forces, in a defensive pocket nicknamed the 'Hexenkessel', on the outskirts of Arnhem, Holland in September 1944 chosen for the inaugural Bilderberg meeting in 1954? (asks Tony Gosling)[2]

The 69 meetings have been attended by at least[3] 2884 participants (and a further 116 more "in attendance"), each of whom have pages on this website.[4] They are often mentioned in conjunction with two other, less secretive, organisations: the Trilateral Commission and the Council on Foreign Relations. The 2020 Bilderberg was not held reportedly due to COVID-19. Many Bilderberg regulars were busy with different aspects of COVID-19 and there may also have been no meeting in 2021.

Around 120 financiers, military leaders, heads of corporations, nation states and deep politicians meet to discuss projects of mutual interest (such as, according to a former chairman, the creation of the Euro).[5]

The group has been accused of involvement in false flag attacks,[6][7] but such charges may be more suited to deep state milieux such as Le Cercle. 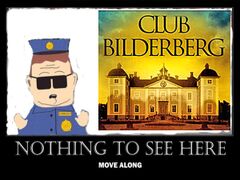 The official narrative of the Bilderberg group used to be that there was no such group.

Nowadays however, the dates and attendance of meetings are published, and the story being that these famous and busy people, normally subject to scrutiny by paparazzi, need time to relax and take time away from public scrutiny.

Iain Hollingshead wrote in The Telegraph in the run up to the 2010 Bilderberg that "Dan Brown aside, conspiracy theories don’t come much bigger than this". He began the article "I have just discovered that a shadowy cabal of global luminaries, including Henry Kissinger, David Rockefeller, Prince Charles, Peter Mandelson, Lord Carrington, David Cameron, Queen Beatrix of Holland and the chairman of Barclays Bank, have been plotting to overthrow national governments and form a fascist one-world empire" and stated that "part of the lure to conspiracy theorists is that the group wasn’t properly reported in the mainstream media until very recently."[8]

The BBC quoted David Aaronovitch (exposed later as member of a cluster of UK journalists set up by the UK deep state's "Integrity Initiative") as stating that the Bilderberg is "really an occasional supper club for the rich and powerful".[9]

The intense secrecy and use of armed guards belie the claim that Bilderberg is a mere social event, as do the leaked conference reports and their relationships to subsequent events. The report of the original Bilderberg noted that:

“When the time is ripe our present concepts of world affairs should be extended to the whole world.”
(1954)  [10]

Willy Claes, who attended Bilderberg in 1994, said on Belgian radio that at Bilderberg each participant is given a report and they are "considered to use this report in setting their policies in the environments in which they affect".[11] In 2005, the Bilderberg Steering committee chair, Étienne Davignon, concluded a BBC interview with the remark that "informal and private networks like Bilderberg have helped to oil the wheels of global politics and globalisation for the past half a century".[12] 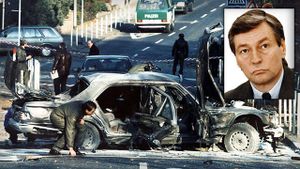 About 1% of all Bilderbergers have died suddenly, some perhaps accidentally, others such as Alfred Herrhausen, a banker on the Bilderberg/Steering committee who embraced the cause of a debt jubilee, were clearly assassinated.

“The Bilderberg Conference was prepared by a group of men of good-will from twelve Western European countries and from the United States of America. Its general purpose was to study the relationship between America and Western Europe in order, by means of a free and frank exchange of views, to lay the foundations for improving mutual understanding between Europeans and Americans on problems of common concern.”
(1954)  [10]
From the now leaked 1954 Bilderberg report

The group was set up by Józef Retinger, who explains that he "set up the Bilderberg to offset "a growing distrust of America". He consulted three friends who pointed him to friends of theirs, a dozen men in all, many of whom attended the eponymous initial meeting in 1954. Originally, these were all Europeans, but the group became established in USA are he travelled there to float the idea. Similarly to the Safari Club, the Bilderberg was named after the location of the first meeting.

Since 1954, the group has had annual meetings usually in April, May or June. There were 2 meetings in 1955 and 1957. The 1976 meeting was cancelled due to Prince Bernhard's difficulties dealing with the Lockheed Bribery Affair. Secretary General of NATO Willy Claes stated in an interview that no two guests are allowed to sit next to each other more than once at Bilderberg, to enable the maximum exchange of views on important subjects. He also explained that guests are normally given around 10 minutes of talk time, after which a report is compiled of their presentation.[13]

Nowadays, meetings have around 100-150 guests. Guests are drawn mainly from Europe and USA, with very few from the southern hemisphere. The first meeting to host Chinese guests was in 2011. Members are heads of multinational corporations, political and financial leaders as well as royalty. Dennis Healey reports that Bilderberg new invitees were expected to speak so that the steering committee members can evaluate them.[14]

More rarefied than the Steering Committee is the advisory committee, which generally numbers only about 7 members. In 2001 David Rockefeller was chairman of the international advisory group, which is made up of long term members of the Steering committee. Advisory group membership was indicated on the minutes from 1981 - 1995 (at least), but had been dropped by 2002. 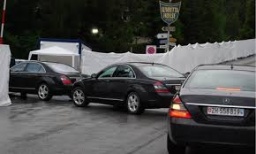 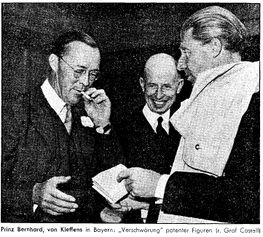 From a 1955 issue of Der Spiegel, which spent 2 pages on the 1955 September Bilderberg

The Bilderberg group originally enjoyed a high level of secrecy, in spite of occasional lapses by the commercially-controlled media (for example, the 1955 piece by Der Spiegel, or the mention on French TV in 1977). The internet proved very important in uncovering the constitution of the group. Many independent journalists, activists and historians have played a part in exposing the group and its activities.

In 2011 the BBC published an article by Tom de Castella entitled Bilderberg mystery: Why do people believe in cabals?, which attempted to reframe the "mystery" of the group away from the question of what the Bilderberg does towards why people are interested in it. The article quoted journalist David Aaronovitch as stating that the Bilderberg is "really an occasional supper club for the rich and powerful".[16][17]

The Bilderberg has responded to its internet exposure with an official narrative that it was never secret. By 2020 the FAQ included "With such high-calibre guests, why is there so little media coverage on Bilderberg?", with the answer "Bilderberg Meetings has never sought any public attention. An annual press conference on the eve of the Meeting was held for several decades up until the nineties, but it was stopped due to a lack of interest. However, the list of participants, main topics and the location are always fully published a few days before each Meeting."[18]

For a long time, outsiders could only speculate as to why 100+ establishment leaders would chose to meet up annually with such elaborate security. Increasingly, however, leaked documents and other information from insiders are clarifying the group's activities. Most obviously, self-enrichment and the accumulation of power and influence are important factors. Members are also sent by deep politicians with specific agendas. The close proximity of so many figures from different nations facilitates the development not only of social relationships but undocumented international understandings and contingency plans.

Visitors to the 1973 Bilderberg conference included the CEOs of Royal Dutch Shell, British Petroleum, Total S.A., ENI, Exxon as well as senior financiers. Discussions included.[19] Meeting minutes indicate that participants discussed a 400% increase in the price of oil, and created a "plan [on] how to manage the about-to-be-created flood of oil dollars."[20] The price of Egyptian crude oil was around $3 per barrel at the time of the meeting, but was $12 by 1974.[21]

Creation of the Euro

Étienne Davignon, former chairman, stated in a 2009 interview that the group "helped create the euro in the 1990s",[22] a boast which is supported by leaked documents and the Bilderberg's apparent choice of the President of the European Central Bank; of the three Presidents of the European Central Bank, the first two, Wim Duisenberg and Jean-Claude Trichet, were Bilderberg Steering Committee members and the next, Mario Draghi, attended the Bilderberg just before his appointment as president. The ECB's predecessor organisation, the European Monetary Institute was similarly lead exclusively by Bilderberg attendees.

Ferdinando Imposimato, Honorary President of the Supreme Court of Italy and former Senior Investigative Judge, the man who prosecuted the case involving the assassination attempt against Pope John Paul II, wrote a book accusing the Bilderberg Group of False flag terrorist attacks as part of a wider strategy of tension in Europe.[7][6]

RT remarked in 2017 that the Bilderberg "has a rather amazing track record among attendees who have gone on to enjoy high office. Bill Clinton attended his first Bilderberg meeting in 1991, and one year later he was sitting pretty in the White House; Tony Blair attended as a relative unknown in 1993 and in 1997 he was British prime minister; investment banker Emmanuel Macron was an attendee in 2014, and just this year he emerged from the political shadows at the 11th hour to beat out veteran nationalist politician, Marine Le Pen, in the French presidential race."[23]

The top item of the agenda of the 1966 Bilderberg meeting, written by Robert R. Bowie, was the reorganising of NATO.[24] Since that meeting, no one has been permanently appointed as NATO Secretary General without first attending at least one meeting of the Bilderberg.

Since 1963, only three UK Prime Ministers have not attended the Bilderberg group (John Major, Theresa May and Boris Johnson). Again, the most common pattern is to attend a Bilderberg meeting before become leader of a political party.

All Dutch Prime Ministers since 1982 have attended the Bilderberg.

Over 25 Bilderbergers have died from assassination, murder or suspicious premature deaths such as plane crashes.

6 September 2016 Robin  A good overview and vital and original insights
This page contains not only a solid overview, but also important original research about the Bilderberg done by Wikispooks editors. Who knew that the Bilderberg have controlled the NATO Secretary General since 1966?