From Wikispooks
(Redirected from Spanish)
Jump to navigation Jump to search

Spain is a European nation state.

In 2018 Spain’s third largest city, Valencia, announced that it would boycott “apartheid” Israel.[1] 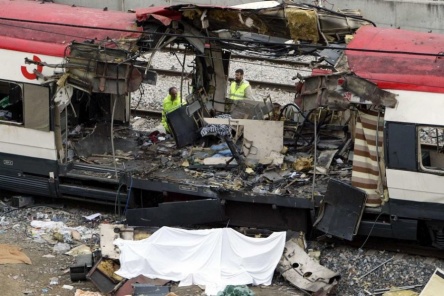 On the 11th of March 2004, 10 bombs were set of on trains in the nation's capital, Madrid, just days before the election. The commercially-controlled media quickly blamed the attack on Al Qaeda. The Spanish population refused to support to rally behind the sitting government and "stick with the party that had talked the toughest against terrorism".[2] NATO Secretary General, Jaap de Hoop Scheffer, described it as a "coincidence" that on 4 March 2004, there was an anti-terrorist exercise (CMX-04) in Madrid, which anticipated killing 200 people, finishing just a few hours before the bombings. He reportedly visited Madrid on 1 March 2004, just 3 days before the exercise.[3]

The Spanish deep state can be understood as a continuation of the regime of Francisco Franco. It is class based in the bourgeoisie, the victors in the civil war 1936-39. The military cooperation with the US and NATO during the Cold War created structures that run parallel to the elected government. After the democratization 1975-81, the civil service was never really reformed. The police, the army and the business leaders consisted of the same people. The new generation journalists and editors (see Juan Luis Cebrián)and right wing politicians (see José María Aznar) were the sons and daughters of important people in the old regime, shedding the outward fascism, but never being in doubt of who should rule the state.[citation needed] 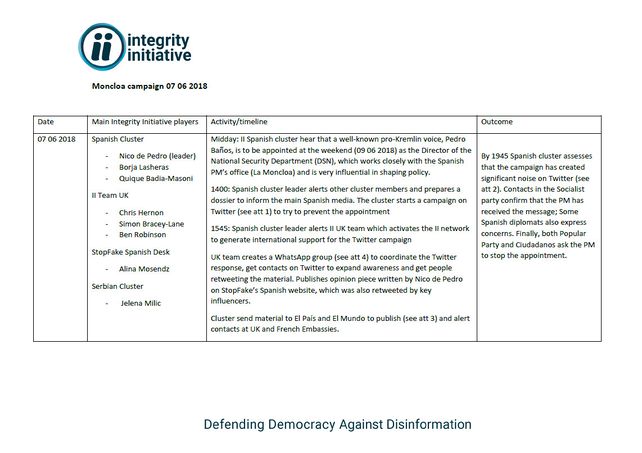 A timeline of the Moncloa campaign, a covert smear campaign by the Integrity Initiative's Spanish cluster to block the appointment of Pedro Baños as Director of the Spanish Department of Homeland Security on grounds of alleged pro-Kremlin sympathies. This document was part of the first Integrity Initiative leak, released in November 2018.

When the Integrity Initiative heard that Pedro Baños was due to be appointed as Director of the Spanish Department of Homeland Security, they launched a smear campaign. Six days later the job was given to Miguel Ángel Ballesteros instead.

Cannabis use is legal in private areas and decriminalized in public areas.

Citizens of Spain on Wikispooks