David Dees was a commercial artist who was critical of many official narratives. His work is widely used by websites to illustrate articles similarly critical of Official Narratives

Dees family stems from Mississippi and Louisiana. He learned art from his father, an amateur artist.

After a brief run through in art school, Dees joined staff at an Atlanta, Georgia graphic studio creating images for magazine and newspaper advertisements. In 1984 he west to Los Angeles. He set up a freelance studio specializing in airbrush illustration for the entertainment industry, and developed an arsenal of acrylic air-brushing techniques from super-realism to wacky high energy cartooning.

For the next 17 years Dees illustrated video and DVD covers, toy packaging, movie promo store displays, and children's books, working for big corporate clients such as Paramount Studios, Warner Bros., Geflen Records, Hanna Barbera and Sesame Street Magazine as some of his favorite clients. In the 1990s, Dees learned to use computers to make artwork.

Dees originally believed the 9-11 official narrative pushed by commercially-controlled media. However he moved his internet based illustration studio to Europe and lived in Sweden for the next 10 years, which gave him some distance on the USA. In 2003, while studying close-up photos of the Pentagon event Dees suddenly woke up to the truth of 9-11. Up to that point he had been proud to have been an unquestioning patriot, but -- as he wrote on his Facebook page -- "he now saw the arrogance, the lies, and the murderous criminal facade the American government truly was, the shock triggering a long introspective process of digging for info on the shadowy secret government some call 'going down the rabbit hole', because it branches off, and goes as deep and as dark as you willing to confront. He studied, read, and listened, and soon was armed with a solid understanding of secret societies, zionist banking criminals, and the New World Order agenda. Dees had changed. Uncharacteristically, he raged and argued to anyone that would listen just how unknowingly controlled and spiritually enslaved we all were. With a radical new activist fire in his eye, 'sleeping sheeple' good friends were lost, but many new 'awake activist friends' on the internet were made."[1] 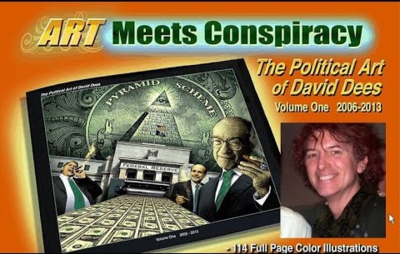 In 2006 Dees designed his first ever political illustration, named World War W for George W. Bush. It "featured an orange planet earth being bombed in the middle east by green dollar signed weapons of war. He emailed the piece to Jeff Rense for possible publication on rense.com, and the day it landed on the front page of the top alternative news website for millions to view, an exciting new political activist art style was born. Using all the visual tricks he had learned from years in the trade, the seasoned artist began creating an endless tirade of political and social commentary illustrations that literally exploded onto the internet 9-11 Truth scene. With it's origins purely organic and emotionally-driven, Dees‘ art was noticed the world over as a stunning, often wild, form of geopolitical artistic expression which found humor in an insane world...while just as often warned of the cruel ‘silent weapons‘ and bloody hands of the genocidal, tyrannical elite. Appearing in countless alternative news documentaries, blogs, and websites, the ‘art missiles of truth‘ circulated virally through the internet and today has gained a wide international audience."[1]

Uncensored Magazine named Dees "the most controversial artist in the world today", and radio talk show host and nuclear physicist, Bill Deagle, called Dees the "Nikola Tesla of political art". Critics have written ‘"avid Dees is the Norman Rockwell for this new century", and many have pointed out the courage it takes to sign your name to art that exposes, defames and ridicules the most brutal police state control grid ideology this world has ever seen. Dees returned to America in 2012 was living in Oregon, working in political and book cover illustration.

In a 9 March 2020 email to subscribers, Dees announced that he had just been diagnosed with stage 4 melanoma cancer and that he had declined any orthodox medical treatment for his condition. He sent 2 further subscriber emails, both providing upbeat news of his fight against the disease. He passed away on 28 May 2020.