Document:Chelsea and Julian are in Jail. History Trembles. 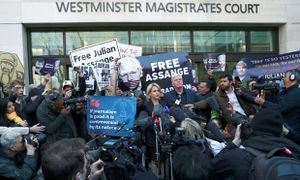 ★ Start a Discussion about this document
Chelsea and Julian are in Jail. History Trembles.

Tonight both Chelsea Manning and Julian Assange are in jail, both over offences related to the publication of materials specifying US war crimes in Afghanistan and Iraq, and both charged with nothing else at all. No matter what bullshit political and MSM liars try to feed you, that is the simple truth. Manning and Assange are true heroes of our time, and are suffering for it.

If a Russian opposition politician were dragged out by armed police, and within three hours had been convicted on a political charge by a patently biased judge with no jury, with a lengthy jail sentence to follow, can you imagine the Western media reaction to that kind of kangaroo court? Yet that is exactly what just happened in London.

District Judge Michael Snow is a disgrace to the bench who deserves to be infamous well beyond his death. He displayed the most plain and open prejudice against Assange in the 15 minutes it took for him to hear the case and declare Assange guilty, in a fashion which makes the dictators’ courts I had witnessed, in Babangida’s Nigeria or Karimov’s Uzbekistan, look fair and reasonable, in comparison to the gross charade of justice conducted by Michael Snow.

One key fact gave away Snow’s enormous prejudice. Julian Assange said nothing during the whole brief proceedings, other than to say “Not guilty” twice, and to ask a one sentence question about why the charges were changed midway through this sham “trial”. Yet Judge Michael Snow condemned Assange as “narcissistic”. There was nothing that happened in Snow’s brief court hearing that could conceivably have given rise to that opinion. It was plainly something he brought with him into the courtroom, and had read or heard in the mainstream media or picked up in his club. It was in short the very definition of prejudice, and “Judge” Michael Snow and his summary judgement is a total disgrace.[1]

We wrapped up the final Wikileaks and legal team meeting at 21.45 tonight and thereafter Kristinn Hrafnsson and I had dinner together. The whole team, including Julian, is energised rather than downhearted. At last there is no more hiding for the pretend liberals behind ludicrous Swedish allegations or bail jumping allegations, and the true motive – revenge for the Chelsea Manning revelations – is now completely in the open.

To support the persecution of Assange in these circumstances is to support absolute state censorship of the internet. It is to support the claim that any journalist who receives and publishes official material which indicates US government wrongdoing, can be punished for its publication. Furthermore this US claim involves an astonishing boost to universal jurisdiction. Assange was nowhere near the USA when he published the documents, but nonetheless US courts are willing to claim jurisdiction. This is a threat to press and internet freedom everywhere.

These are scary times. But those may also be the most inspiring of times.

We are reassembling Wikileaks/Julian legal and media team from 10am Friday in Doughty Street Chambers. I and others will be available for further media interviews from then. I can be reached on 07979 691085.