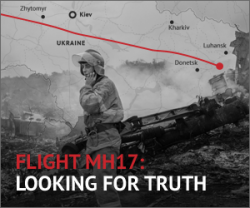 It has been a year since the shoot-down of Malaysia Airlines Flight 17 over Ukraine, resulting in the death of 298 passengers and crew. The initial response by the U.S. government supported the contention that the likely perpetrators were anti-government forces in southeastern Ukraine (the customary media misnomer for them is “separatists”), and that they were possibly aided directly by Moscow.

On July 29, 2014, we Veteran Intelligence Professionals for Sanity (VIPS) suggested that the United States Government report publicly what intelligence it actually had relating to the shoot-down lest the incident turn into another paroxysm of blaming Russia without cause. We are still waiting for that report.

MEMORANDUM for the President

Tensions between the United States and Russia over Ukraine are fast reaching a danger point. A major contributing factor in the American public’s negative perception of Moscow is last year’s downing of Malaysia Airlines Flight 17.

A public report detailing the investigation of the incident by the Dutch Safety authorities is expected by October but the draft is reportedly already in the hands of the United States government. There is speculation that the report will dovetail with media and leaked government sources that have placed primary blame on the ethnic Russian Ukrainians in southeastern Ukraine opposed to the government put in place after the Western-engineered coup of Feb. 22, 2014, in Kiev.

As the relationship with Moscow is of critical importance, if only because Russia has the military might to destroy the U.S., careful calibration of the relationship is essential. If the United States signs on to a conclusion that implicates Russia without any solid intelligence to support that contention it will further damage an already fractious bilateral relationship, almost certainly unnecessarily. It is our opinion that a proper investigation of the downing would involve exploring every possibility to determine how the evidence holds up.

Currently, the only thing the American public and worldwide audiences know for sure is that the plane was shot down. But the shoot-down might have been accidental, carried out by any one of a number of parties. Or it might have been orchestrated by anti-government forces, with Moscow either conniving in some way in that action or not. It is also possible that the downing was deliberately carried out by the Kiev government or one of Ukraine’s powerful oligarchs to implicate the anti-Kiev forces and Russia in this mass murder. And finally, though less likely, it might even be that based on the available intelligence it is impossible to determine who did it.

In light of the high stakes involved both in terms of our extremely important relationship with Russia as well as in establishing a trustworthy narrative that does credit to the White House, the failure of the Administration to issue a coordinated intelligence assessment summarizing what evidence exists to determine who was responsible is therefore puzzling. If the United States government knows who carried out the attack on the plane it should produce the evidence. If it does not know, it should say so.

In what follows, we former intelligence professionals with a cumulative total of some 360 years in various parts of U.S. intelligence provide our perspective on the issue and request for a second time that the intelligence over the downing be made public to counter the fuzzy and flimsy evidence that has over the past year been served up – some of it based on “social media.”

It would not be the first time for a tragic incident to be exploited for propaganda reasons with potentially grave consequences. We refer to the behavior of the Reagan administration in the immediate aftermath of the shoot-down of Korean Airlines Flight 007 over Siberia on August 30, 1983.

Hours after the tragic shoot-down on August 30, 1983, the Reagan administration used its very accomplished propaganda machine to manage a narrative emphasizing Soviet culpability for deliberately killing all 269 people aboard KAL-007 in full knowledge that it was a civilian airliner. In reality, the airliner had been shot down after it strayed hundreds of miles off course and penetrated Russia’s airspace over sensitive military facilities in Kamchatka and Sakhalin Island. The Soviet pilot tried to signal the plane to land, but the KAL pilots did not respond to the repeated warnings. Amid confusion about the plane’s identity – a U.S. spy plane had been in the vicinity hours earlier – Soviet ground control ordered the pilot to fire.

The Soviets soon realized they had made a horrendous mistake. U.S. intelligence also knew from sensitive intercepts that the tragedy had resulted from a blunder, not from a willful act of murder (much as on July 3, 1988, the USS Vincennes shot down an Iranian civilian airliner over the Persian Gulf, killing 290 people, an act which President Ronald Reagan dismissively explained as an “understandable accident”).

The story of KAL-007 should come to mind when considering the fate of MH-17. There might be legitimate reasons for opposing the increasingly authoritarian government of President Vladimir Putin, but exploiting a tragedy does not equate to constructive statecraft for dealing with an adversary.

At a minimum, the White House and State Department one year ago displayed unseemly haste in deciding to be first out of the starting gate with a narrative implicating Russia, at least indirectly – a narrative that may not be based on fact. That twelve months have passed and there has been no effort made to either correct or amplify the record is unacceptable.

Both Russia and Ukraine deny any active role in the MH-17 shoot down. So do the anti-coup forces in southeastern Ukraine. Someone knows something and is lying to conceal a role in the incident. From the U.S. perspective what happened needs to be clarified and become a matter of public record. No other nation has the resources that the U.S. had to come up with an evidence-based answer; and intelligence collection and analysis are the tools that must be used. The information released to date does not bear close scrutiny; it does not permit an informed judgment as to who is lying about the shoot-down of Flight 17.

One year ago today, National Intelligence Director James Clapper authorized a background briefing including some sketchy talking points in a very short “Government Assessment” for selected mainstream journalists. It was just five days after the shoot-down and two days after Secretary of State Kerry pointed the finger of blame at anti-coup Ukrainians and Russia. Understandably, corroboration was being sought.

Like Kerry’s presentations on the Sunday talk shows of July 20, 2014, however, much of the “Government Assessment” was derived from postings on “social media.” The July 22, 2014 briefing addressed, inconclusively, the key issue of who fired the Buk anti-aircraft missile widely believed to have downed the airliner on July 17, 2014.

No update to that five-day-after “Government Assessment” has been provided over the past year. Are we asked to believe that one year later the intelligence community still cannot adduce evidence that goes beyond insinuation regarding the Buk missile?

The July 22, 2014 briefing also suggested that the missile might have been fired by a Ukrainian “defector.” Has there been no clarification on that point? It is, frankly, very hard for us to believe that the U.S. intelligence community has been unable to expand its understanding of these key issues over the past year.

To be sure, there has long been a tendency in Washington to “fix the intelligence around the policy,” to quote the Downing Street memo relating to the inglorious start of the Iraq War. More recently, we note the claim repeatedly made by Secretary of State John Kerry on August 30, 2013, that “we know” the regime of Bashar al-Assad was responsible for the chemical incidents near Damascus nine days before.

In that case, Kerry also cited a “Government Assessment” to support his charges. We saw the introduction of this unique genre of “assessment,” instead of the normally required “Intelligence Assessment,” as evidence that honest intelligence analysts were refusing to go along with the preferred narrative. In fact, Kerry’s accusations turned out to have been based on false and even fabricated intelligence provided by opponents of the Syrian government.

Choosing to Reveal the Truth

If the White House has concrete, probative intelligence regarding MH-17, we strongly suggest that the time is right to approve it for release before the “blame Russia” narrative becomes completely dominant. The American people are perfectly capable of judging for themselves what took place but they need to have all the information presented without bias and without any attempt to evade unpleasant conclusions. And it should be done even given the risk of compromising “sources and methods,” as the broader issue of war or peace with Russia is something that should be of paramount concern to every American.

What is needed is an Interagency Intelligence Assessment – the mechanism used in the past to present significant findings. We are hearing indirectly from some of our former colleagues that the draft Dutch report contradicts some of the real intelligence that has been collected. Resorting to another “Government (not Intelligence) Assessment” to sidestep the accountability issue is not appropriate and is itself an insult to the integrity and professionalism of the intelligence community.

Mr. President, we believe you need to seek out honest intelligence analysts now and hear them out, particularly if they are challenging or even opposing the prevailing groupthink narrative. They might well convince you to take steps to deal more forthrightly with the shoot-down of MH-17 and minimize the risk that relations with Russia might degenerate into a replay of the Cold War with the threat of escalation into thermonuclear conflict. In all candor, we suspect that at least some of your advisers fail to appreciate the enormity of that danger.

The courtesy of a reply is requested.

For the Steering Group, Veteran Intelligence Professionals for Sanity: