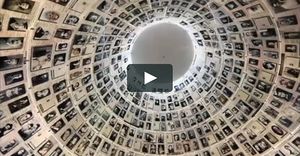 The Board of Deputies of British Jews (BoD), described by Jewish activist Tony Greenstein as a “pro-Israeli advocacy group”, has expressed outrage over a BBC correspondent’s remarks made during a report on the Holocaust memorial at the Yad Vashem’s Hall of the Dead, marking 75 years since the liberation of Auschwitz by Soviet soldiers.[1]

Orla Guerin, who has previously worked as BBC’s Jerusalem correspondent, was in Jerusalem to cover the solemn event, and began with interviewing a Holocaust survivor, before describing the Hall of the Dead in her report.

However, the 33 seconds which caused controversy, was her narration over footage of Israeli soldiers entering the hall:

“Young soldiers troop in to share the binding tragedy of the Jewish people. The state of Israel is now a regional power. For decades it has occupied Palestinian territories. But some here will always see their nation through the prism of persecution and survival,” Guerin added.[2]

This prompted the BoD’s vice president, Amanda Bowman, to respond:

“In an otherwise moving report on the experiences of a Holocaust survivor, Guerin’s attempt to link the Israeli-Palestinian conflict to the horrors of the Holocaust was crass and offensive.”

Other groups have joined the condemnation, the Campaign Against Antisemitism (CAA) has made a formal complaint to the BBC, and threatened to refer the matter to regulatory body, Ofcom. The CAA cited the international definition of anti-Semitism in “drawing comparisons between Israeli policy and the Nazis.”

However, the BBC denied the accusations, stating:

“The brief reference in our Holocaust report to Israel’s position today, did not imply any comparison between the two, and nor would we want one to be drawn from our coverage.”

Nevertheless, the coverage did draw criticism from former BBC executives.

“I cannot recall a more foul – sickening, indeed – report by any journalist, either in print or broadcast.” In his opinion, the BBC has brought itself “eternal shame” for allowing the material to be broadcast.

Gary Sinyor, also in the Jewish Chronicle, writing in defence of Guerin’s comments, argues that the real “offensive” language was not allegedly drawing comparisons with Nazis, but the continued illegal Israeli occupation of Palestinian lands, when she stated:

“For decades, it has occupied Palestinian territories”. Although he believes the remark was not necessary, Sinyor explains: “She’s not comparing the Holocaust with the Palestinians.”

The BoD’s website made it clear that they were against the politicising of the report on the memorial:

“Linking the Israeli-Palestinian conflict to a report on the 75th anniversary of the liberation of Auschwitz-Birkenau.”

However, it appears that Israeli prime minister, Benjamin Netanyahu’s inflammatory reference to Iran, a country with the second-largest Jewish population in the region, as the “most anti-Semitic regime on the planet”,[3] during an address marking the same event, along with fear-mongering accusations of nuclear weapons development, went unnoticed by the very same critics.[4]