Document:The World would not survive a Hillary Clinton Presidency 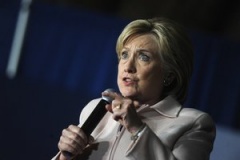 This is an English translation of an article that I (Paul Craig Roberts) wrote for the German magazine, Compact. I was encouraged by the high level of intelligent discourse that Compact brings to its readers. If only the US had more people capable of reaching beyond entertainment to comprehending the forces that affect them, there might be some hope for America.

Hillary Clinton is proving to be the "teflon candidate." In her campaign for the Democratic presidential nomination, she has escaped damage from major scandals, any one of which would destroy a politician. Hillary has accepted massive bribes in the form of speaking fees from financial organisations and corporations. She is under investigation for misuse of classified data, an offence for which a number of whistleblowers are in prison. Hillary has survived the bombing of Libya, her creation of a failed Libyan state that is today a major source of terrorist jihadists, and the Benghazi controversy. She has survived charges that as Secretary of State she arranged favours for foreign interests in exchange for donations to the Clintons' foundation. And, of course, there is a long list of previous scandals: Whitewater, Travelgate, Filegate. Diana Johnstone's book, "Queen of Chaos", describes Hillary Clinton as "the top salesperson for the ruling oligarchy."

Hillary Clinton is a bought-and-paid-for representative of the big banks, the military-security complex, and the Israel Lobby. She will represent these interests, not those of the American people or America's European allies.

The Clintons' purchase by interest groups is public knowledge. For example, CNN reports that between February 2001 and May 2015 Bill and Hillary Clinton were paid $153 million in speaking fees for 729 speeches, an average price of $210,000.

As it became evident that Hillary Clinton would emerge as the likely Democratic presidential candidate, she was paid more. Deutsche Bank paid her $485,000 for one speech, and Goldman Sachs paid her $675,000 for three speeches. Bank of America, Morgan Stanley, UBS, and Fidelity Investments each paid $225,000.[1]

Despite Hillary's blatant willingness to be bribed in public, her opponent, Bernie Sanders, has not succeeded in making an issue of Hillary's shamelessness. Both of the main establishment newspapers, the Washington Post and the New York Times have come to Hillary's defence.

Hillary is a war-monger. She pushed the Obama regime into the destruction of a stable and largely cooperative government in Libya where the "Arab Spring" was a CIA-backed group of jihadists who were used to dislodge China from its oil investments in eastern Libya. She urged her husband to bomb Yugoslavia. She pushed for "regime change" in Syria. She oversaw the coup that overthrew the democratically elected president of Honduras. She brought neoconservative Victoria Nuland, who arranged the coup that overthrew the democratically elected president of Ukraine, into the State Department. Hillary has called President Vladimir Putin of Russia the "new Hitler." Hillary as president guarantees war and more war.[2]

Only recently during a National Presidential debate when asked about the continued financing of NATO did Clinton say this:

"With Russia being more aggressive, making all kinds of intimidating moves toward the Baltic countries, we've seen what they've done in eastern Ukraine, we know how they want to rewrite the map of Europe, it is not in our interests. Think of how much it would cost if Russia's aggression were not deterred because NATO was there on the front lines making it clear they could not move forward."

In the United States, government has been privatised. Office holders use their positions in order to make themselves wealthy, not in order to serve the public interest. Bill and Hillary Clinton epitomise the use of public office in behalf of the office holder's interest. For the Clintons, government means using public office to be rewarded for doing favors for private interests. The Wall Street Journal reported that "at least 60 companies that lobbied the State Department during her [Hillary Clinton's] tenure as Secretary of State donated a total of more than $26 million to the Clinton Foundation."[3]

According to washingtonsblog.com, "All told, the Clinton Foundation and its affiliates have collected donations and pledges from all sources of more than $1.6 billion, according to their tax returns."

According to the International Business Times, "Under Hillary Clinton, the State Department approved $165 billion worth of commercial arms sales to 20 nations whose governments had given millions to the Clinton Foundation."[4]

Hillary Clinton has escaped unharmed from so many crimes and scandals that she would likely be the most reckless president in American history. With the arms race renewed, with Russia declared "an existential threat to the United States," and with Hillary's declaration of President Putin as the new Hitler, Hillary's arrogant self-confidence is likely to result in over-reach that ends in conflict between NATO and Russia. Considering the extraordinary destructive force of nuclear weapons, Hillary as president could mean the end of life on earth.