On 8 April 2016, speaking at a waterside rally near to where he was born in Brooklyn, Bernie Sanders called on New Yorkers to vote for him in great numbers and stage nothing less than a grassroots political revolution.[2] Sanders' victory in the Wyoming caucus the following day marked his 7th consecutive win over frontrunner Hillary Clinton.[3] His winning streak was halted by a 58% to 42% defeat in the New York primary on 19 April 2016[4], making his path to secure the Democratic nomination more difficult but not impossible.[5]

"We've got the bright new face of the Democratic Party here tonight: Mr Bernie Sanders. Bernie, you look like a million bucks. Or to put it in terms you'll understand: 37,000 donations of $27 each."[6]

After defeating Hillary Clinton in Indiana on 3 May 2016, Bernie Sanders said:

"I sense some great victories coming, and I think while the path is narrow — and I do not deny that for a moment — I think we can pull off one of the great political upsets in the history of the United States and in fact become the nominee for the Democratic Party. And once we secure that position, I have absolute confidence that we are gonna defeat Donald Trump in the general election."[7]

Bernie Sanders became a member of the Democratic Party in 2015, having been the longest-serving independent in US congressional history, though his caucusing with the Democrats entitled him to committee assignments and at times gave Democrats a majority. Sanders became the ranking minority member on the Senate Budget Committee in January 2015 and had previously served for two years as chair of the Senate Veterans' Affairs Committee.

Sanders favours policies similar to those of social democratic parties in Europe, particularly those of the Nordic countries, and has built a reputation as a leading progressive voice on issues such as campaign finance reform, corporate welfare, global warming, income inequality, LGBT rights, parental leave, and universal healthcare. Sanders has long been critical of US foreign policy and was an early and outspoken opponent of the Iraq War. He is also outspoken on civil liberties and civil rights, particularly criticising racial discrimination in the criminal justice system as well as advocating for privacy rights against mass surveillance policies such as the US Patriot Act and the NSA surveillance operations.[8]

Hillary Clinton pushed through the 2011 Panama Free Trade Agreement but Bernie Sanders was strongly opposed, warning that it would strictly limit the government’s ability to clamp down on tax evasion by wealthy Americans and large corporations stashing their cash in offshore tax havens. Now with the release of the Panama Papers it appears Sanders was right. They show that over 214,000 offshore companies are using Panama to evade taxes. That is unacceptable, and that has got to change.[9]

On 6 April 2016, The Independent reported: "The longer this scandal is kept alive the more beneficial will be for Sanders. And if any more skeletons in the Clinton closet see the light, it will parachute Bernie Sanders into the White House."[10]

In the course of their televised debate in Brooklyn on 14 April 2016, Bernie Sanders accused Hillary Clinton of being in hock to big finance and receiving $225,000 each time she speaks to Wall Street banks.[11] When the CNN’s Dana Bash asked why she hadn't released transcripts from her speeches to Goldman Sachs, Clinton replied:

“There are certain expectations when you run for president. This is a new one but I will tell you this, there is a longstanding expectation that everybody running release their tax returns.”

Sanders responded by offering to take the first step and release his “very boring” tax returns from 2014:

“Unfortunately, I remain one of the poorer members of the United States Senate, and that’s what that will show. I am going to release all of the transcripts of the speeches that I gave on Wall Street behind closed doors, not for $225,000, not for $2,000, not for 2 cents. There were no speeches.”[12]

“What [Donald Trump] is doing and this is his entire political strategy is to divide the American people up based on where we came...So you have a president who gives tax breaks to billionaires and wants to cut Medicare, Medicaid and Social Security. That's not what he's going to run on. You've got a president who tried to throw 32 million people off health care. He ain't gonna run on that one. You got a president who gave 83 percent of the tax benefits to the top one percent, not going to run on that one. So how do you win an election? What do you say — You see those undocumented people, they all your enemy. 'Stand with me. Hate them. Let's divide this country up”
Bernie Sanders (June 2019)  [13]

At an April 2016 Bernie Sanders campaign rally, attended by more than 16,000 people at St Mary’s Park in the South Bronx, actress Rosario Dawson explained to Democracy Now! why she supports Sanders for President over Clinton: 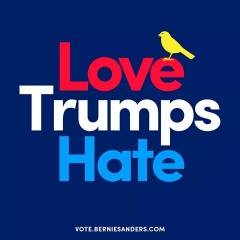 'Like, millions of people marched against the Iraq War before it happened. That’s historical. Millions of people marched against the bailout. Millions of people, students, walked out in 2006 against immigration reform. They texted each other and walked out of their high school classrooms. Like, we keep seeing these mass movements of people going, 'This is not the way things should be done,' and it gets ignored. The thousands of people who have been marching across America for Bernie, that doesn’t get any press coverage, because, Gil Scott-Heron said, 'The revolution will not be televised.' But it’s time for it to be televised. And thank you so much for televising it, because we need people to know how beautiful this moment is. No matter what, look at this. This is incredible. And we have a Jewish man who’s talking about Palestine. Like, do you know what I’m saying? Like, this is a really, really remarkable, huge moment, and we cannot gloss it over. You’re doing a disservice to people by doing so. This is something really beautiful. I’m doing this because love trumps hate, not because I need to vote against somebody, but because love trumps hate. This is a love movement. I’m so excited![14]