Hillary Rodham Clinton, a Cabal member and wife of another member, ex-US President Bill Clinton is a former US Secretary of State. She was chosen as the Democratic Party's nominee for the 2016 US presidential election. Although reportedly 0.3% ahead in polls, on 8th November, she lost to Donald Trump, who was elected as 45th President of the United States.[1]

She has been talked about being a presidential candidate in 2024.[2]

As a junior lawyer, in 1973, Hillary "showed her willingness to ally herself with powerful corrupt interests... [she] conspired to deny Nixon access to legal counsel. In order to pull this off, Hillary wrote a fraudulent legal brief and confiscated public documents to hide her deception".[3] This has been denied guardians of the official narrative such as Snopes.com.

In the early 1980s, as a 'nobody' from Arkansas, she was appointed a Young Leader for the French-American Foundation in 1983[4] and 1984[5] (unknown if she participated in the years 1985-88), implying that she was seen as promising enough to be handler for next year's Young Leaders.

In 1997 as FLOTUS, Clinton organized the introduction of the ASFA [6]. This act monetized the termination of parental rights and adoption by state-approved individuals[7].

Hillary Clinton's need for off-the-record, secret communications is illustrated by a leaked 2015 email from Brian Fallon that "Her office on the 7th floor of the State Department did not allow for email use, so she seldom used email during the workday."[8] Her solution was simply to use a private email server at home for sensitive Emails. The FBI's investigation into this email server uncovered the 7th Floor Group, which the FBI termed a "shadow government", but which commercially-controlled media chose to ignore.[9]

In October 2015, a judge ruled that this rendered her exempt from FOIA requests.[10] Edward MacMahon Jr. noted that if a lower-level government employee “cooked up their own home server” and received emails containing classified information, “they would have already been arrested.”[11] The US State Department told the Competitive Enterprise Institute that its FOIA request for Clinton aide emails pertaining to cybersecurity would produce 38,000 pages of emails. In January this was revised downwards to just one page containing one email.[12]

In 2006, Sibel Edmonds named Hillary Clinton as one of her "Dirty Dozen", listing members of congress who "by their action or inaction, have stood against real investigations, hearings, and legislation dealing with government whistleblowers who have exposed waste, fraud, abuse, and or criminal activities within government agencies."[13]

In the 2008 election, Hillary Clinton was a leading candidate for the Democratic presidential nomination. In 2015, she was referred to as "too big to jail" by lawyer Edward MacMahon Jr., citing "a pattern of light punishments for top government officials who have mishandled classified information."[14]

Ending two years of speculation and coy denials, Hillary Clinton announced on 12 April 2015 that she would seek the presidency for a second time.[15] She became the Democratic nominee for the 2016 vote after Bernie Sanders called for her to be nominated at the Democratic National Convention in Philadelphia on 26 July 2016. The Clinton campaign had earlier announced that Tim Kaine had been chosen as her running mate.[16][17][18][19] The Clinton–Kaine ticket then faced billionaire Republican nominee Donald Trump and his running mate Indiana Governor Mike Pence in the 8 November 2016 presidential election.[20]

In the run up to the 2016 presidential election, Hillary's health appeared uncertain, and the commercially-controlled media treated it as a third rail topic. In August 2016, at least two journalists were sacked after bringing up the topic: Dr. Drew Pinsky, whose current-affairs show was axed after 5½ years[21] and David Seaman, from the Huffington Post after mentioning her apparent health decline to coworkers.[22] 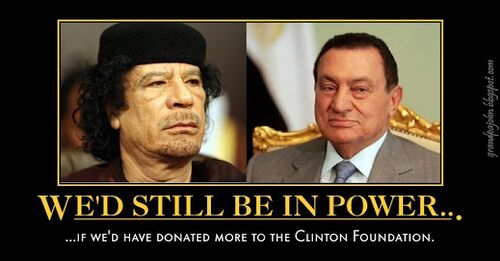 Hillary Clinton has been referred to as a "teflon candidate" in deference to her remarkable ability to "avoid damage from major scandals, any one of which would destroy a politician".[23] Below is an incomplete chronological list by the earliest known date of each controversy. No charges have been brought against her in relation to these incidents. 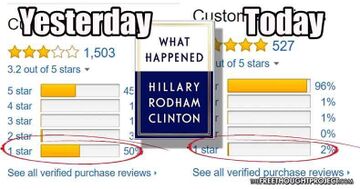 In 2017 Luke Rudkowski tweeted,[46] that Amazon had deleted all the critical reviews of Hillary Clinton's book What Happened (not to be confused with the website What Really Happened, which was started after Mike Rivero lost his job in Hollywood, when he started to make inquiries on the Vince Foster murder).

In January 2019, RT put Hillary Clinton as #8 on their 2018 list of Russophobes, commenting "Hillary moves down the list from last year, but she's still hanging in there because her dedication to blaming everything bad that has happened to her on Russia can't be ignored."

Hillary Clinton has repeatedly denied attending the Bilderberg, and when shown a photo of herself attending the event[Which?] remarked "I'm sorry".[47][48]

Hillary Clinton charges $100,000 to $300,000 for a speech, and together with her husband, received about $2 million/month for professional speaking.[49] She receives such payments into a Delaware-based holding company, ZFS Holdings, which she set up 8 days after stepping down as secretary of state in 2013.[50]

A Quote by Hillary Clinton