Federica Mogherini is an Italian politician and the current High Representative of the European Union for Foreign Affairs and Security Policy and Vice-President of the European Commission in the Juncker Commission since 1 November 2014.

Mogherini was Italy's Minister for Foreign Affairs and International Cooperation from 22 February 2014 until 31 October 2014 in the centre-left Cabinet of Matteo Renzi. [1]

She is a member of the Italian Democratic Party and the Party of European Socialists.

Reaction to the Brussels bombings 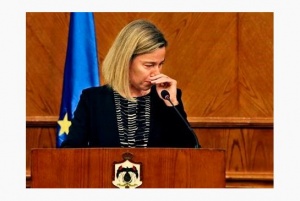 On 22 March 2016 Mogherini was on an official visit to Jordan. She was told of the Mass murder in Brussels just before a joint news conference with Jordanian Foreign Minister Nasser Judeh. She was quoted as follows:

Fighting back tears following the Brussels attacks, EU's foreign policy chief abruptly walked out of a news conference in Amman after saying that "today is a difficult day." Federica Mogherini was wrapping up her opening statement at a joint news conference with Jordanian Foreign Minister Nasser Judeh when she was overcome by emotion. When Judeh resumed speaking, she walked over to him, whispered "I'm sorry," and briefly embraced him. The two then walked off the stage.

Mogherini said in her opening remarks in Jordan that it was a "very sad day for Europe, as Europe and its capital are suffering the same pain that this region has known and knows every single day, being it in Syria, being it elsewhere." [2]

Her emotion was no doubt genuine, but in spite of her dutiful reference to the suffering in Syria and the Middle East generally, it begs questions about her - and her predecessor Catherine Ashton's - feelings towards the non-European tragedies, many of which were and are the direct result of EU foreign policies for which they are notionally responsible. As a perceptive Russian commentator puts it:

“I never saw tears from a European official when terrorists killed our children in Beslan, when terrorists bombed our houses, and subway stations, when they downed our planes, when our people were burned alive in Odessa, or Ukrainian fascists were killing our children in Donbass. They were mostly grinning, sometimes expressing sympathy, but never forgetting to say that it was this “Regime” that was to blame. [3]